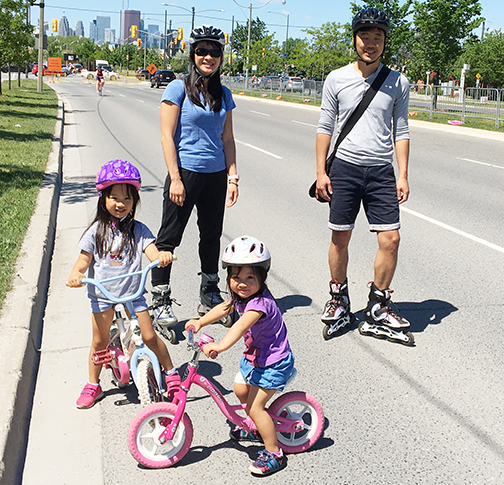 The popular City of Toronto initiative that closed down major roads during the weekends last year will be in place once again in order to allow residents to be outside while maintaining physical distance as recommended by Toronto Public Health.

Like last year, Lake Shore Boulevard East’s eastbound lanes between Leslie Street and Woodbine Avenue will be closed during the weekends.

Bayview Avenue between Front Street and Rosedale Valley Road will also be closed as part of ActiveTO. Except this year, they’re closing three weeks earlier.

The routes are closed to vehicles, but open for residents to cycle or walk to get fresh air and exercise outdoors while observing COVID-19 safety protocols.

“For a lot of residents it was a lifeline in an otherwise difficult summer. It gave people a great excuse to get outside and enjoy the community while staying apart.”

A survey last year by The Centre for Active Transportation (TCAT) at Clean Air Partnership, in collaboration with Park People and assisted the City of Toronto, revealed that 75 per cent of participants in ActiveTO reported being more active and agreed the space felt safe and comfortable.

Another 70 per cent of people surveyed said the road closure was within five kilometres or less from their home. More than a quarter (29 per cent) of cyclists reported being new to cycling or had restarted cycling. More new and returning cyclists identified as BIPOC compared to long-time cyclists.

Virtually everyone surveyed supported bringing back the ActiveTO road closures in 2021. More on the survey can be found at https://www.tcat.ca/activeto-major-road-closures/

The City of Toronto remains in the third wave of the COVID-19 pandemic. Accordingly, residents are still recommended to gather with members of their own household while making use of ActiveTO’s road closures.

Nearby parking is limited, and there is no onsite parking available.

The city will release details on specific closures or adjusted closures as the year progresses.

Bradford said he’s in regular discussions with community members, the city, local BIAs, and the Toronto Police Service to ensure the traffic runs smoothly and participants are safe.