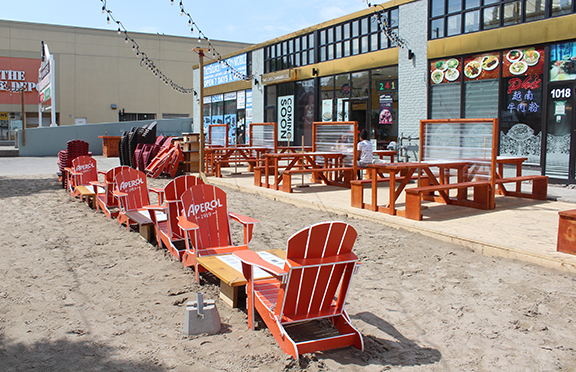 Last year, a group of east end businesses got together and opened Gerrard East Market (GEM) as a way to work within COVID-19 lockdown rules.

String lights went up, picnic tables were built, and 22 tons of sand were dumped, turning the once unassuming parking lot on Gerrard Street East by Marjory Avenue into a tropical vacation spot where patrons could enjoy local food and beer and forget the pandemic for a while.

This year, as the patio weather nears, business owners are left wondering when the province will give the green light for outdoor dining.

Adam Kelly, one of the owner/operators of Vatican Gift Shop and Gardel, is concerned that there might not even be a market this year.

“We thought we were all on the road to a better summer,” said Kelly, “but now it looks like there’s going to be a summer filled with restrictions again.”

With the recent province-wide stay-at-home order being extended, any plans for outdoor dining are on hold until COVID-19 infections drop to a manageable level.

“It’s kind of anyone’s guess as to when they’re going to allow us to even go forward with it,” said Kelly. “Hopefully, we can still do some sort of outdoor event but it’s kind of just up in the air.”

Patios are a bit of a rarity on Gerrard Street, with many businesses limited to opening storefront windows for a bit of fresh air. So when the first round of lockdowns was announced last year, some businesses owners saw it as an opportunity to explore new options.

Enter CafeTO: a municipal initiative aimed at expanding outdoor dining space for businesses that might not have a patio and need to offset the loss of business from COVID-19.

Multiple businesses in the area participated including Poor Romeo, Dive Shop (formerly Hotel Delilah), Vatican Gift Shop, and PYMBO Investments. Together, they each contributed in their own way to help bring the idea to life.

This year, Toronto continued the CafeTO program and extended the zoning permits in light of the extended lockdowns. Of course, this was before the stay-at-home order.

“Gerrard Street doesn’t have a lot of patios like Danforth or Queen,” said Toronto-Danforth Councillor Paula Fletcher, who’s a big advocate for the program and sees the idea spreading down the road.

“I think we were just a leader in starting something like that,” she said. “Actually, it stimulated a lot of interest in the suburbs to get private lots at strip malls to set up the same kind of thing.”

Of the few perks that came out of the last year, outdoor drinking and dining is one that many hope will stick around this summer

“I think the new normal will include a number of these things for the summer,” said Fletcher. “We’re just growing up as a city and making sure that people have places to be outside. Eating outside. Drinking outside. Socializing outside. In a way that we haven’t before.”

Until the restrictions are lifted, however, it looks like we’ll have to make do with virtual patios and whatever string lights we have around the house.