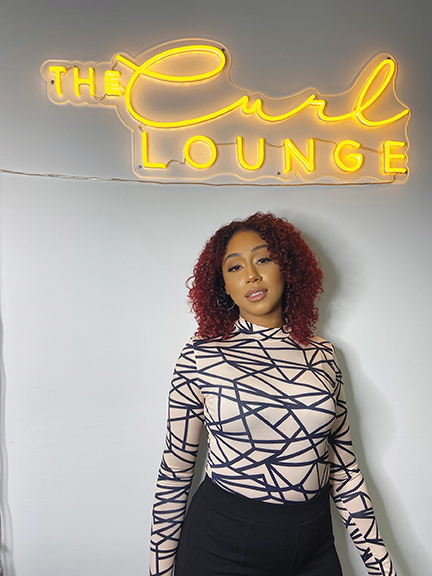 In this new era of enlightenment, it seems like every company, charity and government organization is looking for a way to “diversify”.

Overall, the goal sounds like a good one and of course BIPOC are cautiously optimistic that our white counterparts are finally forging an attempt to make room at the table for us…

But the weary refrain I’ve heard time and again is, ‘how long will it last? Change won’t happen unless everyone is motivated and united in the cause.’ We don’t want to be the ‘token’ Black person in a sea of white faces. We want to be seen as equals, to feel our own worth, and be leaders, not because you let us, but because we are.

Elisha Gotha is a Black woman who leads and most assuredly knows her own worth. She is a smart, confident, business owner and mother of two. Elisha has owned The Curl Lounge, a full-service hair salon with a staff of 10 people, at Kingston Road and Main Street since 2019.

Despite her years of apprenticing and full-fledged hair stylist status, she found working at various salons for other people to be limiting. There was only so far she could go before noticing that her white colleagues, often with less experience and clients than herself, were promoted instead of her.

If for one shameful moment you dared to question her level of service as a reason for this ‘oversight’, I assure you that her online reviews are outstanding. On Google alone she has more than 161 reviews with a 4.7 out of 5 rating (at the time of this interview).

Elisha tells me, “I think the success of my salon is directly related to the level of customer service and feeling you can give your client when you really believe in what you’re doing. There is a lot of gratification in seeing your great reviews. When you’ve given something to a client and they are so grateful, for me that’s the highest level of success.”

Like many young entrepreneurs, success wasn’t a straight line for Elisha.

After years of hair styling, she reconsidered her path because she was pregnant, and went to school for medical administration. Around this time, she accepted a part time job as a stylist with a friend who had opened up her own salon.

“As I was working with her, I realized I could do this. I could open my own salon. She inspired me to be my own boss,” Elisha said. “I was already a master stylist, so this opportunity gave me a different outlook.”

When Elisha started laying the groundwork for her own salon, getting a loan proved to be impossible. After getting turned down a few times, she was saved by her older sister, and now silent business partner.

“She really encouraged me. She told me she had always seen the potential in me to do this. She said, ‘I’ll help you, if you want to do this.’”

And so, the dream got off the ground, and one of life’s lessons was brought into sharp focus: Believing in yourself is a good start, but having others believe in you makes it sustainable.

When asked about the challenges of owning her own business she said, “Finding the right people that believe in your business as much as you do is hard. People that you can rely on and want to provide a high level of service. We are a niche (curly hair) salon, people are coming to us and need someone they can trust, someone who knows how to work with their hair.”

Curly hair has always been rife with stigma and misrepresentation. Movies and television have a troublesome history of depicting women with curly hair as the bad girl, sexy temptress or frazzled ditz. The marketing of most hair products and tools are often targeted at ridding us of “unwanted” curly, frizzy, big hair. Has anyone stopped to wonder why that is and where it came from?

“We’re not specifically a Black salon, we’re a curly hair salon. We’re very diverse, curls are not specific to one race,” Elisha tells me as we discuss the various ways society has placed a hierarchy on looser smoother curls over kinky frizzier hair. When society does this kind of thing, it pits us against each other.

Someone like Elisha, who considers herself Black, is lighter skinned and has a beautiful crown of looser spirals. “As a person with lighter skin I never really fit in at any establishment. If I went into a white salon, they would be like, ‘Oh my god, ethnic hair, I don’t know how to deal with it.’ It would end up being super expensive, and you could see the terror on their faces. Then the other side, where I would think someone will be able to relate to me, there was a certain level of judgement because I had ‘good’ hair. Or they would try to push (hair) relaxer on me.”

What’s at play here is colourism. Even if you’re unfamiliar with the term, you are definitely, at least subconsciously participating in it.

Colourism is discrimination based on how dark your skin tone is. And because white society has favoured those with lighter skin and smoother curls, it has had a divisive effect for Black people.
“I’ve dealt with coloursim and racism. It can feel like you don’t belong,”, Elisha tells me.
“Now, I am more comfortable with myself, but when I was younger, I’m sure it affected my self-esteem. I am more empowered now. After having kids, I got more strength and confidence, it brought me to a new level. I have more focus, I realized that I need to know who I am.”

Today, Elisha definitely knows who she is.

She is a person who didn’t wait for her place at the table, she pulled up a (salon) chair and made her own. Her confidence gives her the strength to build her own dream.

But if this COVID-19 pandemic has taught us anything, it’s that we need to work together and trust that we are all committed to the greater good.

This means, like Elisha, who was lucky enough to have someone believe in her, we all need to believe in each other. We need to believe that this change towards a truly equitable society isn’t a quick fix, it isn’t just another PR tagline.