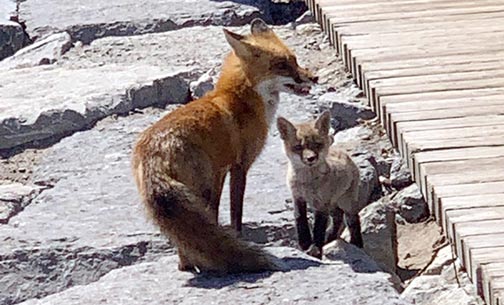 This Beach Metro News file photo from 2020 shows the fox family that had made a den under the Boardwalk.

A family of foxes is back on the Boardwalk, and both an animal protection group and the local councillor are urging people to give them space so as to avoid a repeat of last year’s mayhem.

“We were hoping to avoid drawing too much public attention to the red fox family who have once again made their den underneath the busy Woodbine Beach Boardwalk,” said the Toronto Wildlife Centre in a posting on its Facebook page on April 15.

“Unfortunately, CityNews aired the story after a former TWC volunteer reached out to them. TWC is not currently associated with the individual who was interviewed in the newscast. We fear this broadcast (and likely more) will cause many additional people to flock to the Boardwalk to see the babies as the warm weather continues.”

Beaches-East York Councillor Brad Bradford echoed those concerns in a tweet sent out on April 19.

“A reminder to everyone to please give the family of foxes down at Woodbine Beach the space they need,” said Bradford on Twitter.

“Keep your pets leashed and at a distance for their safety. Remember that these are wild animals and need to be respected as such.”

A family of foxes that made a den under the Boardwalk in spring of 2020 made international news. At first it was a cute story about adorable fox kits playing on the sand and giving people something to smile about during the early days of the COVID-19 pandemic restrictions.

However, the story soon turned nasty with people crowding the animals, feeding them and even threatening volunteers from TWC who were trying to protect the foxes. One of the fox kits was found dead near the den, believed to have been killed by a dog.

In its April 15 post, TWC said it had reached out to the City of Toronto’s parks department to offer help with the fox family this year, but “they refused our assistance.”

In a statement sent to Beach Metro News on April 19, the City of Toronto said it “would like to continue to work with them (TWC) and appreciate their expertise.”

The city’s statement added that it is monitoring the situation. “Animal-friendly fencing and signage has been installed near the den to deter people from getting too close, while ensuring the foxes can come and go,” the statement said.

At this time everyone is trying to avoid a repeat of last year’s situation.

In a Beach Metro News story from spring of 2020, TWC outlined some of the many disturbing incidents that had happened regarding the family of foxes under the Boardwalk that it was trying to protect. The final straw for the TWC and its volunteers was an incident in which a man threatened a volunteer with a knife after being told to stay away from the foxes.

“Last year, people congregated (breaking COVID-19 safety regulations) around the baby foxes, got too close to take photos, fed them, and brought their dogs around them,” said TWC in its April 15 Facebook post.

“Contrary to city bylaws, many of the dogs were off-leash. This caused the fox kits to become habituated to both people and pets who are their natural predators. Tragically a baby fox was killed as a result, and evidence suggests a (likely unleashed) dog was responsible.

“With ineffectual barriers in place, we’re concerned these events may happen again or worse, which will negatively impact the wellbeing of these baby animals and their parents. Last summer on the Voardwalk, TWC volunteers experienced threats and attempted violence as we committed a great amount of time and resources to re-habituate the surviving babies.”

TWC said the family of foxes now living under the Boardwalk are also in “great” danger.

“Tell all your friends, family and community members to refrain from visiting the busy Boardwalk, especially now during a third lockdown. Promote leashes on dogs, no feeding of the foxes (or any wildlife), and to maintain a distance from these vulnerable animals. Together we can prevent the same mistakes from happening again to save their lives,” said the post.

In its statement sent to Beach Metro News, the City of Toronto offered a number of tips for people in the area to help keep the fox family safe. These included not gathering in the area to watch the foxes; not touching them; keeping dogs on leashes; and not feeding the foxes.

More information can be found on the city’s website at www.toronto.ca/foxes