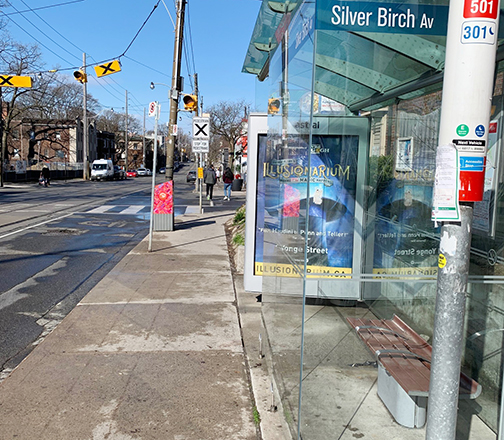 A man sleeping in this bus shelter at Queen Street East and Silver Birch Avenue was stabbed in the leg just before 6 a.m. on the morning of Sunday, April 18. Photo by Mary Beth Denomy.

A man was taken to hospital with injuries to his leg after a stabbing in a bus shelter on Queen Street East in the Beach early on the morning of Sunday, April 18.

Toronto police were called to the bus shelter at Silver Birch Avenue at 5:48 a.m. for a reported stabbing.

When officers arrived they found a man who had been sleeping in the bus shelter with a stab wound to his leg.

According to police, another man had attacked the victim.

Officers quickly located a suspect on a TTC streetcar and he has been arrested.

Police said the victim was taken to hospital to be treated for injuries to his leg.

The investigation is continuing.