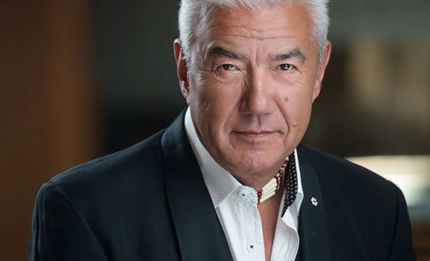 Tom Jackson will host Heal the Earth, a virtual musical event for Earth Day on April 22. Also performing in the event will be Gowan and Don Graham (inset photos).

Fifteen artists from Canada, Sweden, Scotland, and the United States will have their music played in celebration of Earth Day later this month

The virtual concert, Heal the Earth, is scheduled for 7 to 8 p.m. on Thursday, April 22. The event will be pre-produced and then released.

Beach resident Sandy Graham is executive producer for the event.

She brings her years of experience in the music industry to Heal the Earth.

Graham was one of the first women to work at a major music label in Canada and has been in the music industry for more than 40 years with experience in radio, production, and marketing.

About 15 years ago, Cashbox Magazine proposed the idea of opening a Canadian division with Graham.

“Being the entrepreneurial, fearless person I am at times I said, not unless I can own it. And they said, OK, you can own it,” Graham said.

Now, the online magazine and radio station serves as a place to give indie artists exposure, which sets Cashbox apart from other media outlets.

Graham felt that much like the music industry, the environment has also suffered over the years. Without a conscious effort, problems such as climate change and pollution will continue to plague the planet.

“There’s ways to protect the planet and it just takes one step at a time for every person,” Graham said.

Earth Day is the perfect opportunity to address these issues, she said, and the Heal the Earth event will advocate for caring and compassion towards the environment.

For Graham, music is one of the best and most powerful forms of human expression.

“Musicians are always the ones that want to rally,” Graham said, noting how positive music comes out of terrible times.

It did not take much for Graham to get the musicians on board for Heal the Earth.

The COVID-19 pandemic has impacted the music industry much harder than many others. Live venues are no longer an option during the pandemic, and for most musicians performing live is a major portion of their revenue, Graham said. Heal the Earth has attracted a range of younger and older musicians alike as it is an issue everyone wanted to address, no matter their age, she said.

“I’ve got young boys that are in their twenties and I want their kids to be able to play on the beach and swim in the water,” Graham said. “What’s going to happen if we don’t fix it now?”

Small habits can protect the environment even if they do not seem much, she pointed out. Properly sorting garbage for example can ensure that recyclables, organics and waster are properly disposed of.

“It sounds like such a small thing,” Graham said, “but if every person did that it would change the environment.”

The Heal the Earth concert was put together over nine weeks. There is no cost, and the event is non-profit, but viewers are free to make donations to Earth Day Canada. Here is a list of some of the featured performers and the songs they will sing:

Andy Kim – Who Has the Answers (Canada/USA)

David Pomeranz – It’s in Every One of Us (USA)

Don Graham – You Can Count on Me (Canada)

Gowan – Dancing On My Ground (Canada)

Canadian actor and singer Tom Jackson will also act as host and producer for Heal the Earth.

“This is a moral and musical compass designed to guide you on a road paved with caring and compassion. There is hope in our future if we use our voices to take action against the sounds of silence. These are songs to be sung and celebrated so our children can bear witness to the enduring strength that is the love and beauty of Mother Earth.”

For more information on how to take part in Heal the Earth on April 22, please go to https://www.healtheearth.ca