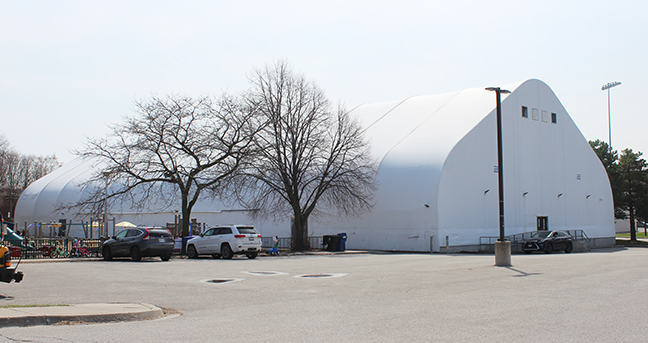 The Ted Reeve Arena's 'Bubble' will be the focus of ice pad improvements funded by all three levels of government.

Three levels of government will be contributing almost $5 million in funding for improvements to Ted Reeve Arena.

The funding announcement was made at an online event on the morning of Tuesday, April 13, featuring representatives from the federal and provincial governments, and the City of Toronto.

The money will be used to upgrade the arena’s mechanical room and replace the refrigeration plant, dehumidifier, piping, concrete pad, dasher boards and protective glass for the ice surface located in ‘The Bubble’ section of the facility.

Located on the northeast corner of Main Street and Gerrard Street East, Ted Reeve Arena opened its doors in October of 1954.

In 2004, the second covered ice surface under The Bubble was opened.

“The rehabilitation will improve accessibility, functionality of the arena, and the quality of experience for users while promoting healthy lifestyles,” said the April 13 press release by announcing the funding.

Beaches-East York Councillor Brad Bradford told Beach Metro News that Ted Reeve Arena is the “heart of the community” and the funding is much welcomed.

“So many residents have grown up on the ice there and – in non-COVID times – have been bringing their own families to learn to skate and play hockey,” he said.

“These investments will help make important upgrades to the arena while also improving its environmental footprint which is something this community cares about deeply,” added Bradford.

“The upgrades are going to improve everyone’s experience at the arena and will make it a place families can enjoy for decades to come.”

Along with Ted Reeve Arena, funding was also announced for the Ramsden Park outdoor rink near Yonge and Belmont streets; the High Park Recreational Trail and Nature Centre; the Pine Point Arena in Etobicoke; and Bill Bolton Arena near Bathurst and Dupont streets.

The funding is part of the Canada Infrastructure Plan to invest in improved sports and recreational facilities across the country as Canadians deal with the impacts and limitations forced upon them by the COVID-19 pandemic.

“Community spaces and recreational centres are at the heart of places where residents want to live, work and raise their families,” said Catherine McKenna, Canada’s Minister of Infrastructure and Communities in the press release.

“Our government is acting to support all of these Investing in Canada Infrastructure Program projects in the City of Toronto by allocating over $7 million in funding. From recreational trails in High Park, to new funding for outdoor ice rinks, investing in the renovations and rehabilitation, these projects will help to extend the lifespan of these important community-based facilities, while protecting people’s health and our economy, so that everyone can enjoy them for years to come.”

Toronto Mayor John Tory added that the funding will allow the city to “continue to provide high-quality services to our residents and will allow us to continue to address much-needed repairs.”

“The facilities and amenities that are receiving funding today are fixtures in their neighbourhoods and have provided an outlet for physical, social and mental well-being for many years,” Tory added.