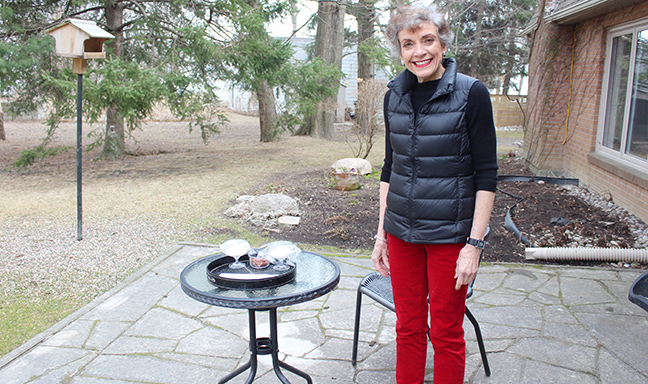 Jan Main is in her 36th year of writing The Main Menu column for Beach Metro News. Photo by Alan Shackleton.

When it comes to food and recipes, Jan Main has made, written, tried and tested a lot over the past 36 years she has been writing The Main Menu column for Beach Metro News.

Main remembers walking from her Kingswood Road house in late 1985 with her four-year-old son Timothy over to what were then the offices of Ward 9 Community News on Kingston Road to let them know she was interested in a food-writing position that was opening up.

In January of 1986 her first column ran in print.

“I was so excited when they told me I’d got the job,” Main remembered in an interview late last month. “I’ve always loved doing this column, and it was a wonderful stepping stone as it got writing under my belt and my name out.”

Along with writing The Main Menu column she also wrote for a number of Canadian publications, Canadian Living and the Toronto Star among them.

Main was born to be connected to food, be it making it, writing about it, or teaching how to do it.

Until she was six years old she lived in Medicine Hat, Alberta, where her father worked for Maple Leaf Mills. From the age of five she can remember seeing jars on the shelves filled with flour and the different kinds of wheat used to make them.

“So I was always interested in food and how it was made.”

Her father was then transferred to Toronto and the family briefly lived in Willowdale before moving up to King City which was where she attended high school.

“I loved food from the time I was in a high chair. All my memories are linked to food,” said Main.

It’s a love that has continued into her retirement years, and she said she could write a book about it called ‘From High Chair to Wing Chair’. (Not that writing a book would be anything new for Main. She has written a number of them including The Best Freezer Cookbook: Freezer Friendly Recipes, Tips and Techniques; 200 Best Lactose-Free Recipes; and The Lactose-Free Family Cookbook.)

Given her love of food and cooking, it was no surprise that when it was time to go to university Main studied home economics at the University of Guelph starting in 1968. After university she was with community services in Toronto for a number of years where she worked with sole-support moms.

Main said food and making food was a great way to connect with the women she was working with and to build their confidence not only in the kitchen but in everything else they did.

“It was in the non-threatening atmosphere of food that they were able to build confidence and then go out and get jobs,” said Main.

In 1978, she opened her cooking school and catering business called Jan Main’s Kitchen.

She also taught cooking classes at the Birchmount Community Centre, Loblaws, and for the LCBO at the Manulife Centre at Bay and Bloor streets. Main also taught a number of special cooking classes as fundraisers for local churches including Bellefair United and St. John’s.

She said it is the sense of community and small-town feel that makes the Beach a special place.

“I’d be walking along the street, and people would always be asking questions about the recipe they saw in the paper or calling me with recipes,” remembered Main.
“People would call me just before dinner time looking for help with something.”

Main said she enjoys hearing from readers, getting their feedback on the recipes and suggestions for certain themes such as gluten-free cooking.

Over the decades, she said the vast majority of the feedback has been positive even when the odd mistake is made such as leaving an ingredient out of a recipe or printing it incorrectly.

Main said there have not been many of those incidents, though she did remember one time she left a critical ingredient out of a cookie recipe which led to a few fails from residents who were quick to let her know something was wrong.

“I delivered a batch of correctly made cookies to Beach Metro for people to try,” she remembered.

Many of the recipes she has included in The Main Menu have become family favourites with local residents, and she still often hears this or get calls from people looking for one of her recipes printed in the paper years ago.

“I got a call about six months ago from a woman for a certain curry recipe. She had saved it for years but in the process of decluttering couldn’t find it. I was able to look in my files and find it for her.”

Main said one of the biggest changes she has seen over the past 50 years is the amount of time families now spend on preparing meals.

In the early 1970s it was still pretty much an all-day procedure. “People loved elaborate recipes. They would spend a whole day gathering the ingredients and working on the recipe.”

Elaborate entertaining with fancy and formal recipes was also a much more common way of gathering and celebrating together, she said.

“There’s been a huge change that way. Recipes of today have to be able to be prepared in 15 minutes and ready in 20.”

People are also much more willing to take on different styles of cooking than they were when Main first started her food career. “Back then if you added sherry to a can of soup, it was considered gourmet.”

As Toronto has welcomed residents from around the world and become one of the globe’s most multicultural cities, food tastes have also changed and evolved.

“People have experience with so many different cuisines and styles of food now. They are now always open for new ideas. They are much more willing to experiment.”

Some of what were once known as Toronto’s Blue Laws played a big role in limiting food options for residents. These Blue Laws, which put restrictions on when, where, why and how alcohol could be served, held back the food industry and limited the creativity of chefs in the city.

“When I first came to live in Toronto in the ’70s it was hard to find a proper restaurant that was even open for lunch. There were lots of lunch counters, but not restaurants. We have become a much more sophisticated city.”

The other big change Main has seen in recipes and food consumption is the strong need for it to be made not only with healthy ingredients but that it not include ingredients considered unhealthy. “People are very health conscious, and I have to be so careful with the amount of ingredients such as salt in a recipe. The ingredients and where they come from is very important.”

Main, her husband Jim and their children lived in the Beach from the mid 1970s until 1991 when they moved to the Scarborough Bluffs area.

She remembered when they bought their Kingswood Road home in 1976. “Interest rates were 18 per cent and the houses were selling like hotcakes.”

Which goes to prove that while a lot has changed in the past few decades some things have not.

Beach Metro News is still serving the community, the houses are still selling like hotcakes, (though the interest rates are much lower) and Main said that there is an essential truth that remains about food and preparing it. “Food has to taste good.”