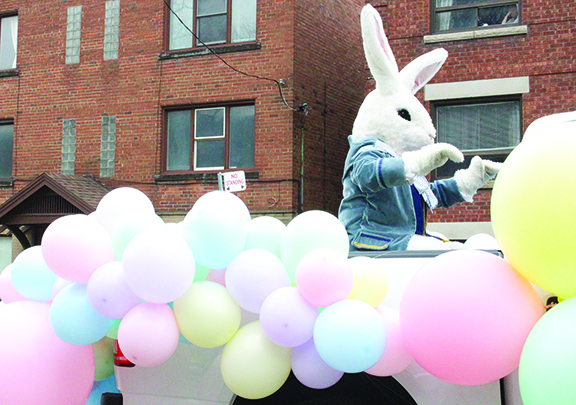 The Easter Bunny is seen here in the Toronto Beaches Lions Easter Parade along Queen Street East in the Beach in April of 2019. File photo by Beach Metro News.

The Toronto Beaches Lions Drive-thru Easter Parade has been cancelled as a result of the provincial “shutdown” order announced by Ontario Premier Doug Ford this afternoon.

The parade event had been slated to take place on Saturday, April 3.

However, the provincial order means outdoor events such as drive-ins and drive-through displays and exhibitions are cancelled as of the morning of April 3.

Claire Chilelli, one of the organizers of the Beaches Drive-thru Easter Parade, said they only just got the news that the event could not take place earlier this afternoon (Thursday, April 1).

“We’ve had to cancel it as all drive-through events are not allowed,” she said in an interview with Beach Metro News late this afternoon.

The Drive-Thru Easter Parade was slated to take place in the parking lot of the Eglinton GO station and would have featured stationary floats showcasing community groups, local businesses, musical entertainment, distanced petty zoo, buskers, antique and rare cars and the Easter Bunny.

Started in 1967 as a Centennial project, the Beaches Easter Parade was originally routed along the Boardwalk for its first seven years. The Beaches Lions Club became actively involved in 1973, and the next year the parade moved to Queen Street East. By 1981, the Lions had become the parade’s official organizer. The Toronto Beaches Lions Easter Parade is now Canada’s longest-running and oldest Easter parade.

This marks the second year in a row the Easter Parade in the Beach has had to be cancelled due to the COVID-19 pandemic.

Last year’s event was scheduled to take place shortly after the pandemic began and was cancelled entirely save for an online site where people could share memories of past parades.

For 2021, organizers had hoped to hold an altered version of the event which would be safe for those viewing it and those taking part by making it a drive-through which people would view from the safety of their cars.

However, the growing case numbers of COVID-19 in Ontario over the past week made that impossible as the province ordered the shutdown.

She added that organizers were working Thursday afternoon to let everyone involved know of the cancellation.