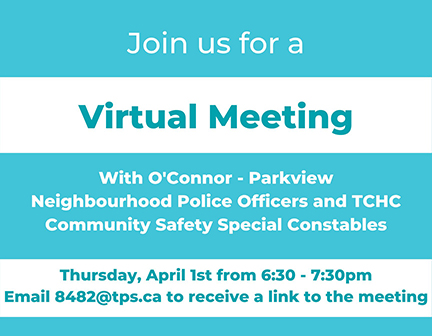 They will be joined by the Toronto Community Housing Corporation’s community safety special constables.

The new Neighbourhood Community Officers (NCOs) were added to the policing team following the tragic shooting and death of Kevin Reddick in the Parma Court area in the summer 2019.

Supt. Reuben Stroble, of 55 Division, and his team committed to tackling violent crime in the Wakunda Place / Parma Court neighbourhood, Bradford said, and he wants the community to connect with the NCOs.

“Residents will have the opportunity to hear some updates about how our NCO program has been going since four new officers were announced in February 2020 and share their input for the issues and priorities that matter most to the community,” said Bradford.

NCOs work in partnership with residents and community organizations to address crime and safety issues.

Bradford said over the last few years 55 Division’s team of NCOs has set an “incredible example for how to do neighbourhood policing right.”

Bradford added the opportunity is timely “as we’ve been having critical conversations about anti-Black racism and structural racism in institutions.”

All residents are invited to attend the virtual meeting.