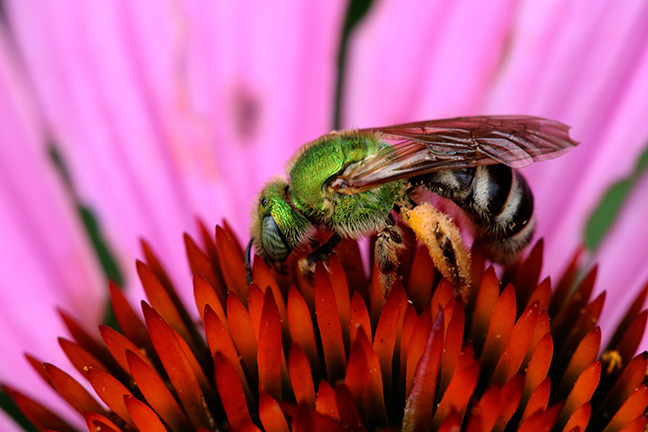 With warmer spring weather to come, people will start planting flowers outside their lawn or in their backyard; garden centres will reopen, and wildlife of all kinds will return. This includes insects such as bees, something Cheryl Fraser noticed last June.

“I was looking out my front window and I saw a lot of activity around my alliums, which were mostly bees,” said the East Toronto resident.

“That day, I made a YouTube video of the bees and flies and I wondered how many other different species were in the Beaches.”

She bought a book, The Bees in your Backyard, and learned more about what she was looking at. Fraser knew she wanted to write a book and record, based on her observation notes and research, more about the bees in the area. She asked her neighbours if she could photograph their gardens and different types of bees in the area and that helped to create her book The Bee Project: A Summer Discovering The Bees In My Neighbourhood.

“I branched out to the neighbourhood overall. I stayed on the sidewalk, sometimes crept up the driveway and once I discovered there were lots of bees, I thought other people would be interested in seeing the diversity of the different bees in the East End.”

She took photos of bees between Coxwell Avenue east to Main Street, south of Danforth Avenue and north of Queen Street East. In her book, she describes the body of each bee, the wings, their antenna.

As they have the same characteristics, they are all defined differently. For example, on male bumble bees, there’s 13 segments and on females, there are 12.

It took Fraser nine months to complete her project. She took photographs from June to September, organizing the bees into their families and genus. She continued into October and in November she selected the best images and completed it on March 1. She has a background in page layout, which gave her an advantage when putting the book together.

“Basically, I plucked away at it. When you start something that is very big, you have to break it down. Once you put them in groupings, you need to make other groups, such as wasp and I had to categorize them,” Fraser said.

“The hardest part was writing the narrative, trying to make a story to put all this together. In the beginning, I told people what kind of bees there were and how to identify them. Then, I did the specific bees I found and wrote about them. After I finished that part, I focused on the other insects (the wasps, the beetles, etc.).”

Many of the bees she photographs are solitary bees, which one have one generation a year. She said if you see one bee in May or June and see another bee in July or August, those are two different types of bees.

Back in 2018, she took a bee keeping course at Niagara College and she worked with a beekeeper. She learned lots about the honey bees, which helped her get comfortable with them.

“They only sting in defence. I was not afraid of them and I had my face in a lot of flowers. You just need to be quiet and don’t move around as much,” she explained.

“When you first approach flowers, the bees all take off. You sit down and they’ll come back, ignore you and mind their business.”

Fraser said she will be taking photographs again this spring because she missed April and May last year. If she gets more good photos this year, she’ll add them to her collection.

Her YouTube video, Little Visitors In My Garden, can be viewed at https://www.youtube.com/watch?v=WhgH1F-oqXU