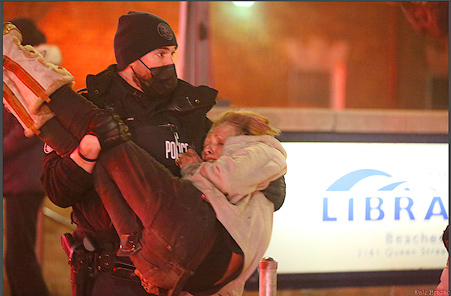 A Toronto police officer carries a woman to an ambulance for treatment after a fire Monday, March 15, evening at the Kew Park Mansions apartment building on Queen Street East just east of Lee Avenue. There were no serious injuries in the fire although a number of people were treated for smoke inhalation. Photo by Dale Brazao.

Aaron Gerrett was spending a quiet evening at his friend’s place when a fire broke out in the Kew Park Mansions apartment building on Queen Street East near Lee Avenue at 7:45 p.m. on March 15. Little did he know that within the next few minutes he was going to help save two people’s lives.

“I was on the same level, directly across from the fire. We opened the door and it was just the thickest smoke you’d ever see. I remember stepping out the door and immediately thinking I had to get down to the oxygen to get out of the building due to the low visibility, he told Beach Metro News in an interview late last week.

“Althea (Aaron’s friend) got out of the room and she tripped over something in the middle of the hallway. I couldn’t see her because of the smoke. I got her and we were trying to guide each other through, and there were more people in the hallway trying to find their way out. It was incredible, it was like a nightmare situation.”

As they left the building, a woman was telling them that her mother was still in the apartment.

Gerrett didn’t hesitate and went back in to try and help.

Due to the smoke, he had his eyes closed and was using the walls to guide his way through the building. Eventually, he got to the apartment and the elderly lady had her walker. She couldn’t keep up with Gerrett as he tried to lead her out, so he did some quick thinking.

“I told her to cover her face. She said she couldn’t walk so I had to carry her,” he said. “I took my hat off, put it over her face and carried her out. I can’t leave this woman here and if I stay here any longer, I wasn’t going to make it. I just had to do it.”

There were no serious injuries in the fire.

Gerrett and his friend Althea spent the night recovering in the hospital after suffering from smoke inhalation, but have since been released.

He told Beach Metro News he is now doing fine, and admitted that he simply reacted to the situation as it took place. “You never know what is going to happen in those situations. By the time we heard the alarm, we had to go.”

Toronto Fire Services said the “suspected cause of this fire as determined by operations officers was careless use of smoker’s articles.”

The building was evacuated at the time of the fire, but most residents were back inside by approximately 10:30 p.m. as the most damage was contained to the unit where the fire is believed to have started.

The fire broke out in a downstairs unit of the building which is slightly below ground level, with only a few steps to walk down from the front entrance to the hallway. TTC buses and streetcars were used on the evening of March 15 as temporary shelters by residents evacuated from the building.

Helping people is nothing new for Gerrett. When he is not skateboarding, he is building skate parks for the community. He is currently couch surfing in the Greater Toronto Area. When he is not in Ontario, he is in Alberta working as a window glazier.

His friend, Jacob Fleischmann has helped set up a GoFundMe page to help Gerrett get a place of his own.

“Thank you Aaron for your courage and for risking your life to save others,” the GoFundMe page reads.