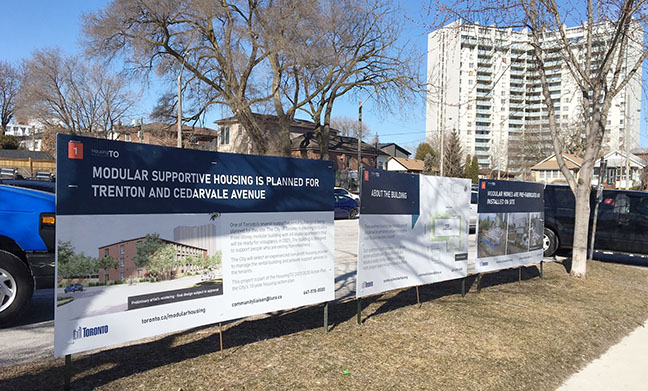 Almost 400 residents from the East York community attended an online public meeting regarding a new supportive housing building at Trenton and Cedarvale avenues, with some expressing support and others expressing discontent.

Beaches-East York Councillor Brad Bradford announced the “urgent meeting” on the night of March 8 in response to a number of concerns residents had raised in their correspondence with elected officials and city staff.

“I wanted to get this conversation started,” Bradford said. “I heard a range of views and concerns, met a bunch of folks in the parks, and streets adjacent to the site.”

The Trenton/Cedarvale modular housing building is essentially a three-storey apartment building with 64 single unit apartments that are 350 square feet each. The building includes a common room, a common kitchen, and several supports for people exiting homelessness ranging from mental health to employment.

The site will be ready for occupancy by late 2021 as a result of the expedited “modular” format of the building.

As is the case with already built supportive housing across the city, including Macey Avenue in southwest Scarborough, the Trenton site will be run and administered by non-profit organizations The Neighbourhood Group and COTA Health.

Bradford said at the meeting that project details were not originally shared with residents in a good manner.

“The rollout of this proposal should’ve been different, it wasn’t done well, and should’ve had more information and more dialogue. Goes to show how challenging these conversations can be in Toronto,” he said.

Concerns raised included at the meeting included community safety, the proximity of the building to Stan Wadlow Park and Parkside Public School and Child Care Centre, increased traffic and congestion from the loss of the parking lot on the current site, and how the building would be operated and maintained.

While some residents showed support for the project, many did not, and expressed discontent with the engagement process.

One resident, Robert Snow, referred to the project and the city’s history with other projects in East York as treating the neighbourhood like a “dumping ground for Toronto” and erroneously referred to the supportive housing building as a “homeless shelter.”

Another resident, Jon Burns, expressed concerns regarding community safety. Derek Macpherson wanted details on who would be responsible for the site.

One woman, Stephanie commented “count me as a parent in support of this new housing, we’re in the middle of such a crisis with homelessness, happy to see action, and I’m happy that it’s supportive housing.”

“I should say in response to a number of comments that there are two supportive and respite housing within very close proximity to my home,” he said. “Contrary to what is suggested in the chat tonight, to which I am paying careful attention, it has never been necessary in this city for me to visit any of these residences with police officers.”

“It never happened because it isn’t necessary, and never has been,” the mayor added.

All of them expressed support for the modular housing projects in the city.

The panel and discussion was moderated by Bruce Davis, a communications consultant from Public Progress.

While residents asked members of the panel questions, Davis seemed to take the initiative to respond before passing it over to a panel member. It didn’t bode well with residents who were seeking answers from city officials and not the moderator.

Tory reiterated that there was “no issue more challenging, frustrating, and perplexing than trying to help our homeless population.”

While saying the projects are about humanity and morality, he also added that it s a better business case and more economically efficient to offer supportive housing to people experiencing homelessness.

Several questions were passed over to Bond, who explained to residents that the modular housing initiative is part of the city’s HousingTO 2020-2030 Action Plan to increase the supply of affordable housing.

“The city reported there are close to 8,000 people experiencing homelessness as of January 2021 in Toronto,” she told residents at the meeting. “There’s an extreme need for supportive housing.”

As residents questioned why the Trenton site was chosen, Whelan explained that sites were selected from a review of city-owned land that looked at local demand for affordable housing, size, configuration, development potential, environmental conditions, local infrastructure, access to public transit, access to health and community services, and official plan and zoning considerations.

Regarding parking concerns, residents were told a parking assessment study was done to measure the parking demand by the nearby park, school, pool, and other amenities. The current lot has 70 parking spaces. Recommendations included adding more on-street parking and possibly using Parkside’s parking lot after hours.

Residents raised an issue with the study, saying the results would be different if the study was done in pre-COVID conditions.

Bond noted that single adults were most likely to be chronically homeless when residents asked why they were being housed instead of families.

Details of that will be discussed at a subsequent meeting on Wednesday, March 17.

Beach Metro News reached out to Abigail Bond to fact-check some claims made by residents at the March 8 meeting, and to get some questions answered.

Bond mentioned there are already 10,200 homes (units) like the Trenton build scattered across the city, and that they’ve blended in with their communities.

While several different non-profit organizations run the combination of supportive housing in the city; Toronto’s first two modular sites at 11 Macey Ave. and 321 Dovercourt Rd. are operated by The Neighbourhood Group and COTA Health, she said. An RFP (Request for Proposal) will be issued to choose an operator for the Trenton site.

Bond brings her experience of working with affordable housing in Vancouver, where several modular buildings have been erected to alleviate the homelessness crisis in the city.

“Ultimately, I don’t know if you would also know in the future that these buildings are supportive housing,” she said of how well they blend into their communities.

She cited research from the Mental Health Commission of Canada that showed supportive housing works.

“It’s a very simple idea, if you give a homeless person agency, a choice, a home, you bring the support they need, connect them, bring them in or connect them or navigate, then there are huge improvements in their health and well-being,” Bond said.

“The evidence is overwhelming that this is the answer around homelessness,” she added.

But some residents didn’t like those responses when she and others had replied during the meeting.

Bond said there’s a “real fear” and “people are worried,” but argued that some concerns were based in a misunderstanding and stigma of how people become homeless.

Bond referenced several research sources bolstering her support for the modular build, one of them a report from the BC Housing Research Centre that showed that property values in the surrounding area of a supportive housing building kept pace with normal trends of the municipality.

Concerns about how the neighbourhood would change are also addressed in the study, that shows 82 per cent of supportive housing respondents reporting positive interactions with neighbours and 73 per cent reporting having friends/relatives in the neighbourhood.

The next community meeting is scheduled for March 17 at 7 p.m., where more information will be shared and more questions answered.