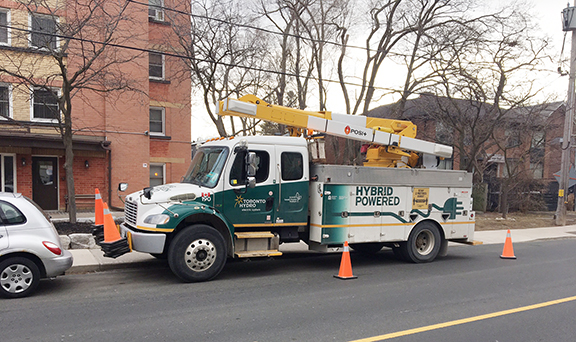 A Toronto Hydro truck is seen on Main Street on March 11. Photo by Alan Shackleton.

In a notice sent to local residents and businesses, Toronto Hydro identified the project area as Danforth Avenue to the north; Queen Street East to the south; Glen Manor Drive to the east and Wineva Avenue to the west.

Toronto Hydro’s website says they are rebuilding the electrical distribution system in the community to improve the reliability of the service. This rebuild includes underground cable removal on city-owned property near the property lot lines of residences and businesses.

In an email, Baker said the first project is already underway.

“The first project, by Danforth Avenue south to Queen Street East, and Wineva Avenue east to Glen Manor Drive, includes removing underground cables on city-owned properties near some residential lots. There will be minimal interruptions to local residents, although some city-approved road and sidewalk closures may occur before the project comes to a close in the fall,” he said.

Baker added that while Toronto Hydro will do their best to limit the impact of construction in the area, some dust, noise and other inconveniences from the work may occur.