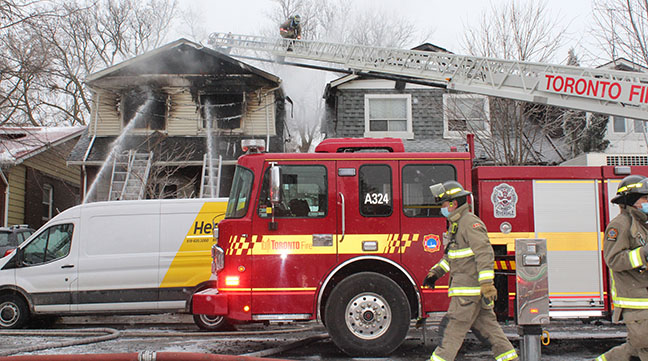 Firefighters pump water into the house at 95 Gainsborough Rd. on the morning of Jan. 29. The fire at the house took the lives of four people. Photo by Alan Shackleton.

The Ontario Fire Marshal’s investigation has determined the cause of the fatal fire at 95 Gainsborough Rd. on Jan. 29 was as a result of an electrical failure in the dining room ceiling.

The Fire Marshal’s investigation also determined that there were no working smoke alarms in the house.

The result of the investigation was made public in a press release issued by the Office of The Fire Marshal on the morning of Friday, March 12.

Injured in the fire were Jade Jacobis and Arija Jansons Celeste, the daughter of Jana and the mother of Kai.

“Everyone must take fire safety seriously. Keep your family safe and make sure you have working smoke alarms and practice a home fire escape plan so everyone knows what to do when the alarm sounds,” said Arija in the press release from the Fire Marshal’s office.

The family will not be providing any further comments, said the press release, and the Fire Marshal’s office was requesting that the privacy of the family be respected during this difficult time.

The fire broke out at approximately 4:30 a.m. on Friday, Jan. 29 at the detached house on Gainsborough Road between Eastwood Road and Coxwell Avenue.

Damage to the house at 95 Gainsborough was so severe that it has since been torn down.

Two neighbouring houses were also damaged in the fire.

“We send our condolences to the family, friends and community of the victims who passed away in the fire and our thoughts are with those injured and/or impacted by this tragedy,” said the Fire Marshal’s press release.

The Fire Marshal was assisted in the investigation by Toronto police, Toronto Paramedic Service, and the Electrical Safety Authority

“Our joint investigation determined that the fire was caused by an electrical failure in the dining room ceiling. Additionally, it was determined that there were no working smoke alarms at 95 Gainsborough Road,” said the release.

Fire Marshal John Pegg added, “When a fire occurs, you may only have seconds to get out safely. With the time change this weekend, I want to remind Ontarians to change the batteries in their smoke alarms and test them. Installing working smoke alarms and testing them monthly is the most important action an individual homeowner can take to protect themselves and their loved ones from the hazards associated with fire.”

Acting Toronto Fire Chief Jim Jessop also reminded residents to make sure they have an escape plan in case of a fire.

“It is vital that everyone practices a home fire escape plan so that everyone knows what to do before a fire occurs,” he said. “We want to see you and your family standing outside your home if there is a fire.”