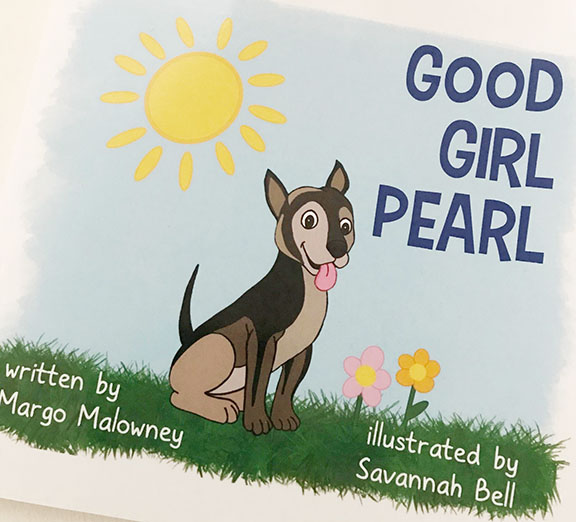 During the ongoing COVID-19 pandemic, people have been looking for ways to keep positive and find ways to help others out including animals.

Anytime it’s about helping pets, there is usually a feel-good story to be found. That is the case with Beach resident Margo Malowney’s book Good Girl Pearl.

It tells the story of how Malowney fostered rescue dogs Pearl and Diamond prior to them being adopted together.

“Pearl’s happy. She and her little sister, Diamond have been adopted into their forever homes and are living their best doggie lives,” said Malowney.

She became involved in foster care for rescue dogs, after her own dog died.

Malowney said she missed having a dog around at home, but was not ready to have her own dog yet. While working from her home in the Queen Street East and Woodbine Avenue area, she said fostering dogs was something she was able to do.

Denise Angus, of Mattie’s Place Pet Rescue and Medical Recovery Centre in Scarborough, had told Malowney that Pearl and Diamond were in need of some special care.

“Pearl was extra scared. They both had cataracts so their vision wasn’t great, but Pearl was further down that path,” said Malowney.

“Her eyes were cloudy and were wide open all the time. She was frozen with fear. I’d bring her out of her crate and she would just tremble. It really affected her. They were with me for two and a half weeks. Every time Pearl made any kind of advancement, I could see her get some confidence, I always told her ‘Good Girl Pearl’. In those two and a half weeks, I must have said ‘Good Girl Pearl’ about 500 times.”

Over the time they were together, Pearl’s confidence grew and Malowney gave both dogs a routine to follow so they have something to look forward to.

It also gave them a chance to remember who they were. At the shelter no one would have seen how lovely Pearl was, said Malowney.

She gave Pearl and Diamond the chance to show who they really were to others and that helped them get adopted.

Malowney says the workers and volunteers and who work with dog rescues are committed to the animals. The shelters know the dogs well and can match people who are looking to adopt with the right animal.

For example, some dogs need a secure backyard because they could run away. Other dogs are happier indoors, and can be in a smaller environment. One thing you need to have when working with these dogs is the ability to love and have a warm heart.

“For Pearl, she was scared, so my environment was quiet, no children running around to startle her, I didn’t have another dog or animal. At her own speed, she can re-find her confidence. She can get over the shock of being surrendered. I don’t know why she was surrendered, but it must have been pretty shocking,” said Malowney.

Along with now being an author, Malowney is a former Olympic athlete. She competed for Canada in the 1996 Olympics in beach volleyball.