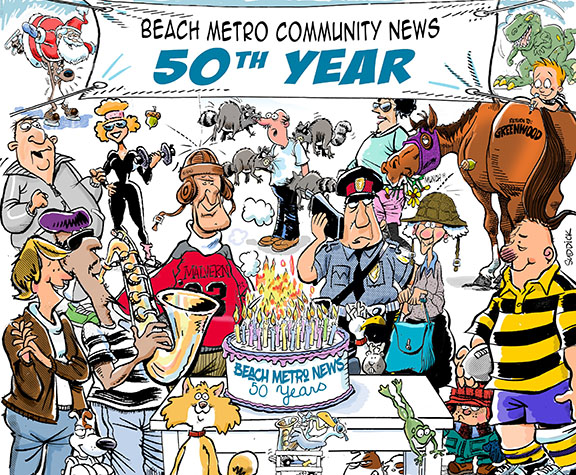 This special cartoon by Bill Suddick recognizes that this March is the start of the 50th year for Beach Metro News. Inset photo shows the front page of the first edition of what was then called Ward 9 Community News on March 1, 1972.

As the last person standing, who has been continually involved with this paper since it began, (well, since its fifth issue in May 1972), it is my pleasure to welcome you to the beginning of its 50th year.

The impetus to start a local paper was the lack of community coverage by the main media. People wanted to know what was happening in their own neighbourhood, and what their politicians were doing.

At the same time there was a plan for a network of expressways linking the growing suburbs to the old city of Toronto. It was generally opposed in Toronto. In the east end the proposed Scarborough Expressway would follow the rail line along Gerrard down Coxwell and link up with the Gardiner. The initial plan called for demolishing 1,200 homes, later changed to 706 in this neighbourhood.

Like several current institutions that started here in the 1970s, Ward 9 News began at the old YMCA at 907 Kingston Road.

That building had been shut down for a while when two Scarborough Road neighbours, Betty Stephen and Lenore Diaz, offered to keep the Y presence alive without recompense by running a drop-in for local groups if the Y would cover the utilities.

Among those drawn to the building was a varied group of people interested in starting a paper. Eight came to the first meeting. A thousand flyers went out before the second meeting, and a crowd came. There were another six public meetings, and many informal ones behind the scenes.

Towards the end of 1971, the group had a name for the paper to reflect its local agenda and the current municipal district (Ward 9 Community News), and a constitution. It was to be not-for- profit and non-partisan. It would be distributed without charge to homes and businesses in the area by volunteers. Financing would come from the sale of advertising. Volunteers would be encouraged to get involved.

A young engineer from Bingham Avenue, Doug White, was entrusted with overseeing the new venture. Doug had been hired on a recycling grant run out of the YMCA. He was re-directed to organize the paper while others washed bottles, crushed cans and cardboard, and promoted recycling on his behalf. All seemed well until two days before the first issue was due off the press on March 1, 1972. Norm Houghton, one of the founders and one of the most important leaders in the early years, had been talking to the staff at Seven News, the Riverdale paper that had been a template. He and they suggested there were too many problems and that the whole thing should be scrapped and rethought. Norm was out-voted and the paper went ahead. During that year it published 19 issues with 4 to 12 pages.

The great coup of 1972 for Doug was a 20-page election issue, and interviews with the three mayoral candidates, including David Crombie, who became mayor of Toronto for the next six years with a policy of curbing the unfettered development in the city, and bringing in a new official plan imposing height restrictions. He had many supporters in the east end.

By the end of 1972 the recycling grant was finished. Doug and his crew were burned out and left. Doug had a hole in his pocket for $1,414 which he had lent to the paper, and never expected to see again. Before moving to P.E.I., Doug successfully applied for a federal grant under the Local Initiatives Program. A new group came forward to administer it.

I had been volunteering in a small way, dropping into the Y to pick up the Community Calendar listings and the Classifieds scrawled on scraps of paper, which I took home to type up on my Smith Corona Portable, and return to Doug to be sent to the printer. I was also a carrier. As I set off on my Balsam north of Pine route, my son asleep in his baby carriage, and a stack of the four-page January 1973 issue before me, I read the magic words “Job Opportunities,” applied and was hired for the next six months.

I thought I was one the luckiest people alive. Forty years later I retired.

So, that’s how it began.

Over the next 12 months we will bring you front page flashbacks, delve into the different decades to find the big stories of the day, and feature some of our long-time columnists, volunteers and staff.

And we will be looking into the future with new ideas and features, and as usual bringing you your local news. And in March 2022 (post-COVID-19 pandemic) we will invite you all to a 50th birthday party.