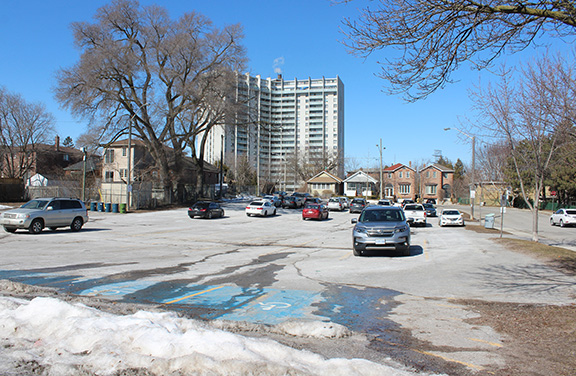 A 64-unit, three-storey modular housing building is planned for what is now a parking lot at Trenton and Cedarvale avenues. The building is for people exiting homelessness. Inset photo shows signs that were put up on March 4 alerting the neighbourhood to the proposal. Photos by Alan Shackleton.

Local residents are upset over the city’s modular housing proposal at Trenton Avenue and Cedarvale Avenue citing concerns of appropriateness of the area and community safety regarding the future occupants of the building.

The concerns have prompted an online community meeting on the evening of Monday, March 8.

The project is part of the City of Toronto’s Housing Now initiative to make use of city-owned lands to address the lack of affordable housing. The modular housing proposal for Trenton and Cedarvale in East York aims to create a three-storey building with 64 studio apartments, self-contained with a private kitchen and bathroom each.

It’s designed to help individuals who are exiting homelessness, and will be administered by a local non-profit housing provider under an agreement with the city.

The “modular” part of the term essentially means pre-fabricated components of the building arrive onsite ready to construct. This allows the city to build the affordable units within the span of months, and not years.

The Macey Avenue building had its own local opposition – several area residents, including the West Oakridge Neighbourhood Association wrote letters to the city, elected officials, planners, and media expressing concerns with “social problems associated with vagrancy and public intoxication” from people experiencing homelessness being moved into one area.

With the Trenton Avenue site, a number of residents are also speaking in opposition. Global News was on the scene of a local protest at the parking lot near the Trenton site in late February, where residents referred to the lot as a community “hub.”

Resident Steve Bland told Global News he’s not against providing affordable housing, but noted that increasing the population density in the area by adding the Trenton site “may not be the appropriate place” for “people going through the most troubling and difficult times of their lives with addiction and mental health issues.”

The city-wide initiative to construct modular housing for people exiting homelessness is being released in phases.

The Macey Avenue site was included in the project’s Phase 1, and now Trenton – which was approved just a few weeks ago – is part of Phase 2.

In a letter to Beach Metro News, local resident Lars Bot, expressed concerns about the building’s proximity to Parkside Public School and Stan Wadlow Park, which are across the street.

“The simple fact that a homeless shelter is planned across from a public school and park… shows how poor this program is planned,” he wrote.

They both reminded residents that the modular housing buildings are housing and not shelters. “I want to acknowledge that the engagement with the community did not start well enough,” Bradford said regarding the Trenton site.

“The proposed Phase 2 sites were announced with the positive and significance that it deserved for an effort like this to house our city’s most vulnerable.”

“But the city was too slow to have information ready for residents to understand the process and what it all meant,” he added.

Even the signs at the site informing residents of the project were delayed, Bradford said. It’s why a community meeting was scheduled for March 8, in addition to the March 17 meeting that was scheduled prior.

“With the strong response, I quickly realized that was too far away,” Bradford said.

“I’m encouraging anyone who has questions, concerns, and feedback to attend. There are lots of valid questions that need answering.”

Bradford stressed he supports affordable housing but says there are real impacts regarding parking in the busy area and traffic congestion.

The Trenton site was chosen from a list of 40 city-owned land plots.

Bradford moved a motion at the most recent Planning and Housing Committee meeting that final recommendations come forward only after community consultations. He also asked a Community Liaison Committee to be set up to “improve lines of communication.”

But he reminds residents that the city is in the midst of both a pandemic and a housing crisis.

“We have to move ahead,” Bradford said. “We have people in encampments – we have people dying on our streets. We need to stop building shelters and start building housing.”

Erskine-Smith has also responded publicly on Twitter to residents’ concerns.

“I strongly support the city’s modular housing initiative,” he wrote. “Too many people are on the streets or in the shelter system. Permanent solutions require stable homes.”

The federal government’s homelessness strategy includes $203 million coming to Toronto from its Rapid Housing Initiative. Erskine-Smith reiterated that these modular buildings are “real homes, not shelters.”

In addition to the studio apartments, the building offers 24/7 support for its residents via administrative offices, program space, a common room, and a dining room.

Erskine-Smith added that through his conversations with local charity The Neighbourhood Group, these modular sites “are a great model” and “many other experts have called for an expansion of these initiatives.”

There will be two community meetings planned in March regarding the modular housing building at Trenton Avenue.

The first meeting takes place March 8 at 7 p.m., residents are asked to register for the virtual meeting at https://bit.ly/38dRac5