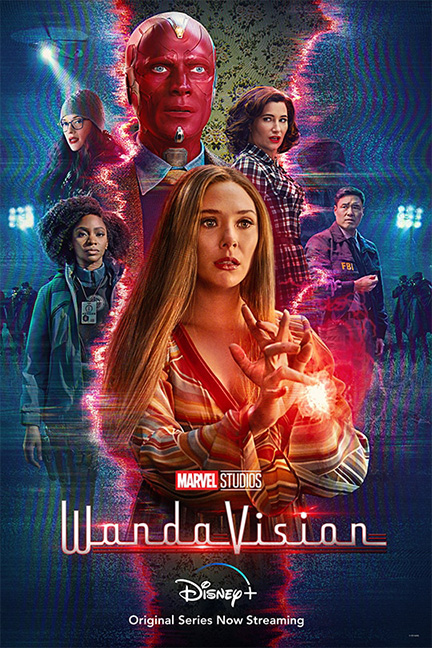 WandaVision is one of the shows that East Toronto's MARZ studio works on.

Visual effects enhance your favourite TV shows and movies, and an East Toronto studio is playing a key role in creating them.

The MARZ (Monsters, Aliens, Robots, Zombies) studio in the Dundas Street East and Carlaw Avenue area, have worked and are working on a number of well-known shows including Watchmen, WandaVision, Star Trek Discovery and Mr. Robot.

“We’re super proud. It’s fun to work on stuff that I am also a fan of,” said Jonathan Bronfman, who is co-president of MARZ.

“We love what we do and I love watching shows we work on. If someone (asks me) ‘What movie did you work on?’ I want to be able to say a movie that you know because it was widely released. We want to do stuff people know about.”

The company’s name, MARZ, came from a suggestion by Lon Molnar who is also co-president.

Bronfman said they both fell in love with the name and nothing could compete with it. He and Molnar teamed up and launched their company in August of 2018.

Coming into 2020, they had about 60 people working with them, but have since nearly doubled to 110 people.

Bronfman said for the film and television production business in Toronto, you have to be based in either the east end or west end of the city.

“Lots of our artists work in the east end. They were just blocks away. I’m at Sherbourne and Bloor and it takes me 10 minutes to get to the office on a bad day. We like the vibe and I’m an east end guy,” said Bronfman.

Bronfman credited Watchmen as being the show that helped MARZ get to the high level it is now working at with WandaVision.

“We take multiple trips to Los Angeles every year, except for last year. We host receptions, bring people to basketball games, whatever engaging events we can throw. At one of the events, the visual effects producer of WandaVision was there, took a liking to us and awarded us the show.”

He said it has been tough working remotely due to the COVID-19 pandemic.

You want to be face-to-face with the clients you work with, said Bronfman, and you want to give the attention they deserve and nothing can replace that.

It has been a challenging time, but MARZ has found ways to stay connected.

“The element that took the biggest hit was company culture because you can’t have much of a culture if you’re not in the office,” said Bronfman.

“Simply walking by someone’s desk and saying ‘hi’ goes a long way. Since our company doubled in size, we have so many people working with us that I haven’t met in person and they haven’t met the people they’re working with in person.”

Bronfman said they hope to, and they look forward to working with Marvel and Disney Plus on future shows beyond WandaVision.

To check out more about MARZ and their other works, their website is at https://monstersaliensrobotszombies.com