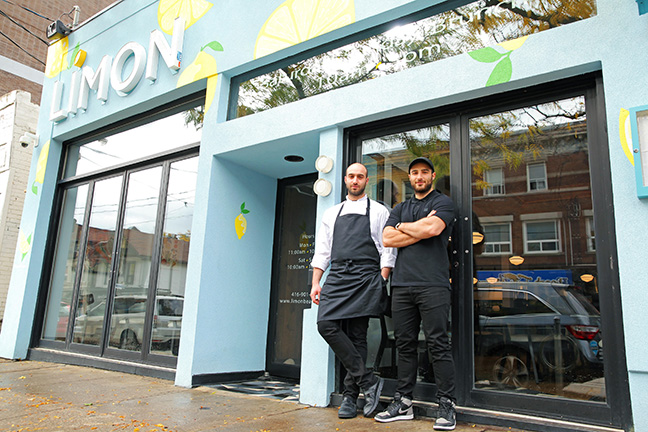 When Jonathan and Benjamin Mishaev opened their restaurant Limon on Queen Street East in the Beach, it was October of 2020 and the city was preparing to take its first plunge into cold weather and more COVID-19 pandemic lockdowns. It was a scary time for any restaurant, let alone a new one.

However, with the help of community social media groups and neighborhood message boards, word spread and business grew steadily for Limon.

“The community’s been really supportive,” said Jonathan in a recent interview with Beach Metro News as he finished putting together a take-out order.

The brothers, who grew up in Tel Aviv, spent evenings and weekends in family owned restaurants learning the nature of the industry. Eventually, they found their calling in serving elevated Israeli food and drink.

Their first venture together, Elm Tree Restaurant, opened in 2014, but had to close in early 2020 due to the abrupt drop in foot traffic from the first wave of the pandemic.
Benjamin, the chef at Limon, is a formally trained chef who graduated from the Culinary Institute of America in New York. After spending some time cutting his teeth in Manhattan, he returned to Toronto to open the first restaurant with his brother.

With Limon, the idea was to open an upscale Israeli restaurant that could show off his experience in the kitchen while Jonathan provides the elevated dining experience.

“I think the service level that we’re going to bring will be next level,” said Jonathan.

Until the pandemic has subsided, however, the restaurant will be operating on a take-out and delivery model only.

“You have to be real with yourself that an upscale Israeli restaurant couldn’t work right now, so we made it a little more casual.” Jonathan said.

Luckily, the style of food lends itself well to take-out, with Mediterranean offerings such as hummus, keftas, falafel, but drawing specifically on their Israeli background, which Jonathan feels will fill a niche in the area.

Take-out isn’t limited to meals, though. Jonathan is quick to remind people that they should “ask about what else restaurants are offering right now,” citing his own pantry items for sale.

Together, the brothers have curated a range of delicacies and childhood treats that might be hard to find elsewhere in the neighborhood.
Things such as Israeli style halva, honey, and local hot sauces are on offer with a few house made specialties, as well, such as pita chips.

Looking to the warmer months, the brothers have their sights set on a cafe program with pastries to try and capitalize on the lively foot traffic in the Queen Street East area.

The real dream, though, is getting the dining room opened up again so that both brothers have a chance to show off their skills.

Benjamin’s skills in plating and presenting his food is largely going unused at the moment due to the pandemic restrictions, and Jonathan is eager to get the beverage program off the ground.

“I’ve got a bunch of Israeli cocktails ready to go for when we open,” said Jonathan.

Limon is located at 1968 Queen St. E. For more information, including ordering take out, please visit the website at https://limonbeaches.com/ or call them at 416-901-3440.