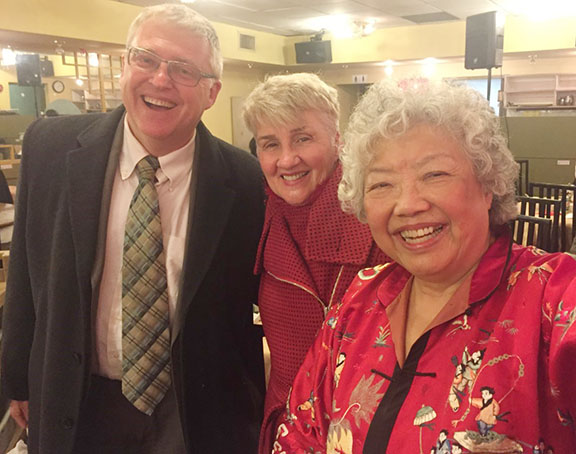 East Toronto lost one of its most prominent community leaders with the death of Valerie Mah earlier this week.

Mah died unexpectedly at the age of 83 on Sunday, Feb. 7, which was her birthday.

She is remembered as a trailblazer in a number of fields, including education.

Often known as ‘Principal Mah’, she was very active in the community as a member of the Chinese Chamber of Commerce of East Toronto, the Community Police Liaison Committee with 55 Division, and for her work with the Ralph Thornton Community Centre.

“Valerie was a real trailblazer. She was one of those people that was there. She was cheerful and she took a leadership role because things needed to be done, not because of recognition,” said John Campey, executive director of the Ralph Thornton Community Centre on Queen Street East.

“She was a kind, generous person. Someone who didn’t have any rough edges. She was a lovely and very special woman. She will certainly be missed in the Ralph Thornton community and the East Toronto community.”

In her role with the Chinese Chamber of Commerce of East Toronto, Mah helped to have the traditional Chinese archway built on Gerrard Street East just west of Broadview Avenue in 2009. Working on that project with her was Toronto-Danforth Councillor Paula Fletcher.

A friend of Mah’s for many years, Fletcher she was an “amazing woman, leader in education and the Chinese community in Toronto” and that “she’s irreplaceable”, in two separate Tweets.

The Ralph Thornton Centre held an online Lunar New Year event on Wednesday, Feb. 10, an event at which Mah had been scheduled to attend and read horoscopes.

Campey said the event felt her loss profoundly as she was one of its key participants and organizers.

“I never knew her to say ‘No’ to anything she was asked to help out with,” said Campey, who has known Mah for 30 years going back to when he was a public school board trustee and she was a principal.

Beaches-East York Councillor Brad Bradford, who was elected in 2018, said that even though he did not get the chance to work as closely with Mah as his other colleagues, he knew her as “the embodiment of a certain kind of spirit that exists here in the east end”.

“The outpouring of love and commemoration following Valerie’s passing is a testament to all she represented and did for this community,” he said in a statement sent to Beach Metro News.

Other local politicians who had worked closely with Mah over the years also praised her contributions to the community.

Toronto-Danforth MP Julie Dabrusin said in a Facebook post that Mah was a “trailblazer” and a “vibrant community organizer”, who is “responsible for all the beautiful street art in East Chinatown and many many other initiatives in this neighbourhood”.

Toronto-Danforth MPP Tabuns said on Twitter that Mah “never stopped helping people and bringing amazing energy. We will all remember her with fondness”.