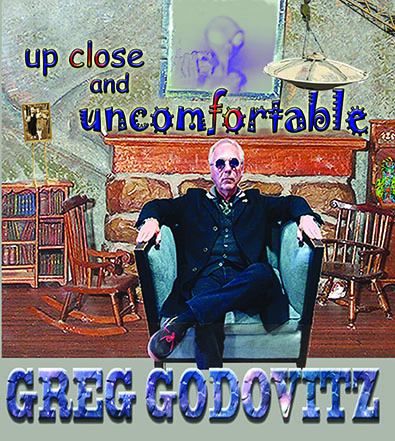 Greg Godovitz has recently released his third book, Up Close and Uncomfortable. Inset photo shows the book's back cover.

When you have a music career that spans almost six decades, you are going to have a lot of stories to tell.

Veteran rocker and southwest Scarborough resident Greg Godovitz, of the iconic Canadian band Goddo, shares some of those tales from the stage and behind the scenes in his third book Up Close and Uncomfortable.

Recently released, this book follows his previous two – Travels with my Amp and The Fartian Chronicles.

In an interview with Beach Metro News last week, Godovitz, 70, said he came up with the title for his latest book back in 2005 after filming an acoustic performance.

“We (his girlfriend and himself) laughed about it. The thing I think I always had was a good sense of humour about what I do. I don’t take myself seriously.”

Up Close and Uncomfortable puts more of a focus on Godovitz’s childhood and early life than his earlier books.

One of his favourite memories was when his mom asked him if he knew Bob Dylan.

“My mom used to work at Friar’s Tavern (which became the Hard Rock Cafe at Yonge-Dundas Square and is now a Shoppers Drug Mart). I would spend Saturday afternoons there. When I was 12 or 13, I was hanging out with the guys that became The Band, Robbie Robertson and all those guys that ended up with Bob Dylan,” he said.

“My mom saw them play for the first time after hours when they closed the club one night. I was in Yorkville and I was 17. My mom called me and asked if I knew Bob Dylan. I said ‘I know who he is, mom, but I never met him.’”

His mother told him The Band and Bob Dylan were jamming after the club closed.

Godovitz said his mom’s description of Bob Dylan at the time was that “he’s not much of a singer.”

Godovitz also met Ronnie Hawkins, who the members of The Band also played with. Some 40 years after they first met, Godovitz was leader of Hawkins’ band for two years.

When he was younger, Godovitz also had the chance to meet Paul McCartney from The Beatles and David Clayton-Thomas from Blood, Sweat & Tears. Godovitz related that he also once encountered a shape-shifting alien while on an airplane.

“There was a guy sitting by the window. I didn’t notice him because I was calming my son down. When we were flying and the lights turned off, he turned to me and asked me if I knew what a Foo Fighter is (not the band).

“I tell him I know exactly what that is. I tell him about all the UFO experiences I had over my life. It was dark, I didn’t really look at him. I don’t remember if he had an accent or what he sounded like, and I was doing most of the talking. I looked down at his hand on his left leg and his fingers were 10 inches long. I stopped talking and I was transfixed. I turned to the right, looked him in the face and I passed out.”

Along with the stories in his book, Godovitz said there is also some Goddo music that is of yet unreleased.

He said he has about two albums worth of material to release. They will re-issue some music on heavy-grade vinyl sometime this year.

Godovitz also talked about how hard it is right now for bands and artists who are unable to perform for live audiences due to COVID-19.

He said it hasn’t affected him personally as he was shifting his focus away from performing live in clubs after a 57-year musical career playing live before the pandemic hit.

However, he said he is looking forward to playing some live gigs once things get back to normal.

Godovitz said he feels bad for the artists and band members who are not getting to experience the “on-the-road lifestyle” of touring and performing because of the pandemic restrictions.

Godovitz was born and raised in Scarborough and still lives in the Midland Avenue and Kingston Road area.

“It’s a great community. My girlfriend is from Midland and Eglinton. We’re both Scarberians,” he said.

Godovitz went to high school at W.A. Porter Collegiate (near Warden Avenue and St. Clair Avenue East), and that’s where his musical career began – at the same time The Beatles were in their prime.

At the start of the COVID-19 pandemic, Godovitz helped support a number of local businesses by performing acoustic sets outside their establishments. He called it his 2020 World Tour of Scarberia and saw him perform in front of businesses ranging from restaurants, to flower shops to butcher shops.

He said he is currently working on his fourth book, The Idiots Trilogy: Part 4.

To learn more about Greg Godovitz and the book Up Close and Uncomfortable, please go to https://www.shopgreggodovitz.com/