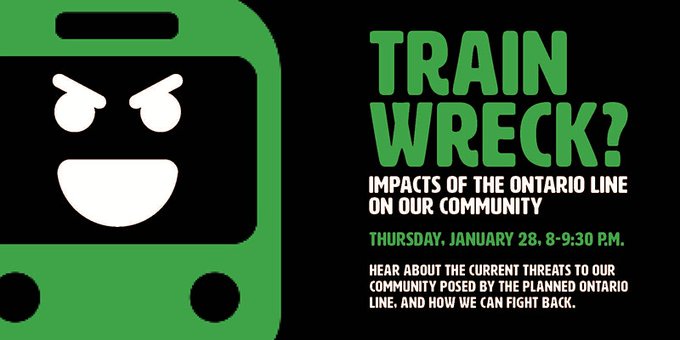 The online meeting Train Wreck? Impacts of the Ontario Line on our Community is set for the night of Thursday, Jan. 28.

East Toronto residents are invited to take part in an online community meeting on Thursday, Jan. 28 to discuss the impacts of the proposed Ontario Line rapid transit project in the area.

The meeting is being presented as Train Wreck? Impacts of the Ontario Line on our Community.

The meeting will be discussing the impacts of the above-ground plans for Ontario Line on the East Toronto community southwest of Pape and Danforth avenues.

Originally known as the City of Toronto’s Downtown Relief Line, which was to be built completely underground, the Ontario Line is the Province of Ontario’s plan to reduce congestion on the existing subway lines (Line 1 – Yonge-University, and Line 2 – Bloor-Danforth). It will also aim to relieve congestion at Yonge-Bloor station, one of the locations where those two lines cross.

Starting at the Ontario Science Centre near Don Mills Road and Eglinton Avenue East and running southwest to Exhibition Place, the Ontario Line is a mixture of underground and above ground/at-grade track.

Proposed Ontario Line stations Gerrard, Leslieville and East Harbour are set to be above ground and are putting parks (such as Jimmie Simpson Park, Bruce Mackey Park, McCleary Playground, Gerrard Carlaw Dog Parkette, and the South Riverdale Parkette at Gerrard and Carlaw) green spaces, community housing and businesses in jeopardy, according to the East End Transit Alliance.