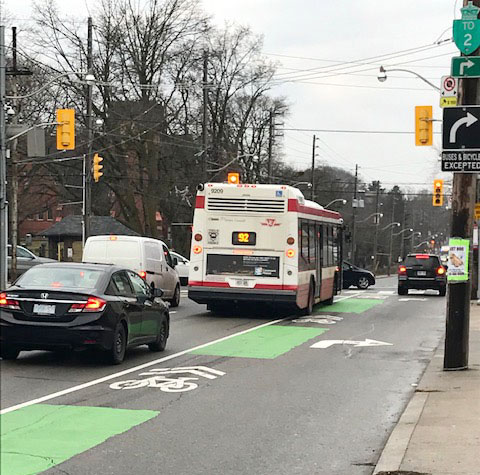 Woodbine Avenue bike lanes are the elephant in the room

The letters of J. Reitsma and Janet Wood express serious concerns regarding the bike lanes on Woodbine Avenue.

Gridlock, air quality, increased traffic on side streets and the most crucial issue, safety.  On a Sunday morning walk in October along Kingston Road I noticed the intersection at Woodbine was completely shut down and occupied by many police cars. Just to the east of Woodbine was one stationary pickup truck and in front of it, a twisted bicycle lying in the middle of Kingston Road. A very disturbing sight.

The intersection was closed for hours. I don’t know the outcome but I pray the cyclist was not injured.

The point here is this intersection is dangerous for northbound traffic, drivers and cyclists alike. There is a challenging confluence of two through-lanes, then a bike lane and then a right turn lane. But the right hand through-lane is narrower than a normal lane which causes traffic to vear into the other lanes. Indeed the bus cannot safely stay within this lane.

The City of Toronto, in its effort to accommodate the bike lane, has created a very hazardous situation. Anyone who has driven north at this intersection will know exactly what I mean.

There is a similar issue of safety at Woodbine and Gerrard.

Northbound cars line up waiting to make their right turn and take up part of the bike lane. As a result, cars wishing to continue up Woodbine will veer into the left turn lane and cross into the oncoming lane in the intersection. Again a very confusing and, more importantly, hazardous situation.
In addition, the implementation of the bike lanes has led to drivers using residential streets as a short cut to Kingston and Gerrard.

Indeed the number of vehicles racing along my street to avoid the snail pace of Woodbine has increased radically. The speed of the vehicles is also a concern in consideration of the number of children living on the street and the fact there are schools at both ends.
It has become apparent the Woodbine bike lanes were installed without the proper due diligence and study. The design is flawed. It’s the elephant in the room.

Anyone who drives up Woodbine is forced to navigate a bizarre combination of relentless, incomprehensible signage and seemingly random green road paint and cryptic symbols — not to mention those battered, flattened bollards — while all the time veering left then right trying to stay in the designated lane.

The stretch of Woodbine from Queen Street to O’Connor Drive is frankly, a confused, gridlocked embarrassment.

To paraphrase Yogi Berra:  Woodbine is so congested that nobody goes there anymore.
It is time we ask Beaches-East York Councillor Brad Bradford to consider a restructure of Woodbine Avenue.

And please, don’t just add more signage, bollards and curbs. This is a matter of safety.

There are many neighbourhood streets that can accommodate north and south bound cyclists. No one is against the installation of bike lanes but let’s do it safely and sensibly.

A former Prime Minister once famously said “reason over passion.”  But maybe there is room for both.

I read the letter from J.Reistma and am in agreement despite being an avid cyclist.

Unfortunately there are those in the cycling community who are too enthusiastic when it comes to cycling and want to impose their will on everyone.

Woodbine Avenue is a major commuter link from east of downtown so to choke this route off only causes traffic gridlock and increases air pollution from idling cars.

Bike lanes on Woodbine Avenue is a bad idea which should be rectified.

I have rarely cycled on major streets as they are too dangerous.

Old Toronto has a perfect street grid where other streets off the major ones can be used as cycling corridors so it would make sense to keep vehicles and bicycles apart as much as possible.

The Jarvis Street bike lanes were also a mistake as that is a major auto route coming off Mount Pleasant Road. The time and money wasted on that was rectified when the Sherbourne lanes were put in, which is where they should have been in the first place.

Birchmount Road was the right street for a bike lane as Warden Avenue and Kennedy Road on either side of Birchmount are links to Hwy. 401. But the bike haters got those lanes removed many years ago.

The bike haters also made a mistake by recently removing bike lanes from Brimley Road.

I appreciated the letter about the new bike lanes from a reader who lives near Danforth and Woodbine. It sounds as if it can be quite frustrating trying to get around by car from her location, and I understand her impatience with the lane reductions.

As a bike rider, the bike lanes have been a game changer. I live near the same intersection, and try to do errands on Danforth by bicycle whenever possible.

I like the exercise, it’s easier than trying to find parking (and pay for it), and it lowers my carbon footprint a little bit. Plus, it keeps a car out of the car lane, making life marginally easier for other drivers.

Judging by all the other cyclists I see when the weather is at all suitable, many people share this thinking. (And for some, car ownership is out of the question.)

Prior to the bike lanes, cycling on Danforth was nerve-wracking, to put it mildly.

As area residents know, drivers in a hurry often tried to use the curb lane to get past a few other vehicles when there were two lanes each way. The uncertainty of cars approaching rapidly from behind, combined with trying to keep an eye on parked cars to my right in case someone opened a door without checking made every trip tense, and for some riders, much worse than that. Not any more.

The new bike lanes are a blessing for those of us on two, self-powered wheels. I can do short trips now, and even get all the way to the city centre with peace of mind, so I look forward to getting the bike out.

I do sympathize with drivers struggling with congestion as I pedal around. Occasionally, that’s me behind the wheel. I am very grateful to all the drivers who show such respect for cyclists, and patience with slower pedestrians.

I realize this perspective won’t end drivers’ frustration. But there are many points of view on bike lanes. We’re all collaborators in keeping the city moving, and keeping everyone safe while we do so.