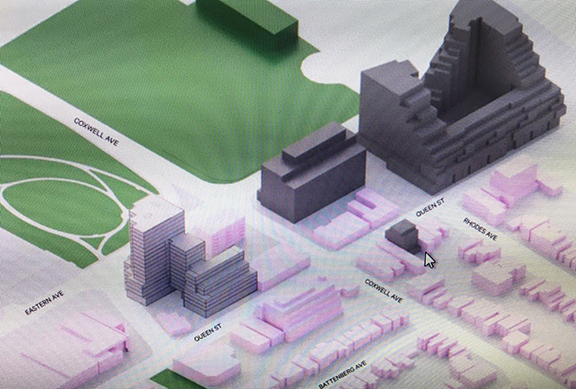 The proposed Housing Now building (light grey) southeast of Coxwell Avenue and Queen Street East is shown on the left of this image. To the right is the Queen and Ashburn buildings (dark grey) to be built on the current site of the Don Summerville Apartments southwest of Coxwell and Queen. Image: Housing Now.

A number of local-residents and affordable-housing supporters also took part in the recent City of Toronto consultations about the Housing Now buildings proposed for 1631 Queen St. E.

While some residents on the call were concerned that the development would exceed six storeys – as defined in the Queen Street ‘Urban Design Guidelines’, our volunteers requested that the City should allow all affordable-housing projects to exceed those arbitrary height-limits that were created for market-rate developments.

As was suggested nearly a decade ago when those ‘Urban Design Guidelines’ were being drafted – it is irresponsible for the City to create design-guidelines and height-limits on Queen Street without including default waivers for not-for-profit developments.

Toronto has an affordable-housing crisis. The residents in our community can choose to be part of the problem – or part of the solution. In reality, that solution requires much greater density than any of the current ‘Urban Design Guidelines’ allow on both of the Housing Now projects at Queen and Coxwell – and at the Danforth Garage site at Coxwell and Danforth.

Our Danforth and Beaches neighbourhoods need to get denser, new rental-apartment developments near our transit stops need to be taller – and our priority as a community has to focus on more on the real-world costs of constructing new affordable-housing in the 2020s, than on shadow-policy and angular-plane designs that collude to make new affordable-housing project on those streets infeasible for not-for-profit developers.

Saying that you support new affordable-housing or seniors-housing during City planning consultations is meaningless – if you are also asking the City to enforce design-constraints and parking-minimums that make the buildings impossible to construct under a not-for-profit model.

On the site at 1631 Queen St. E.,  our Housing Now volunteers have asked the City to consider a 10-storey frontage on the Queen Street side of the development – with zero step-back or angular plane, while maintaining the 17-storey tower on the Eastern Avenue side.