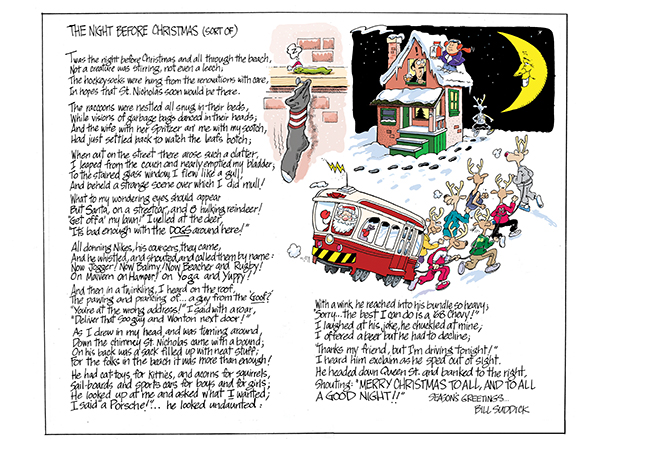 The poem below and the illustration above were created by Beach Metro News cartoonist Bill Suddick a number of years ago. Neither Bill or others here at Beach Metro News can say exactly when it first appeared in the pages of our newspaper, but we felt this was the year to share it again online with our readers as we all could use a laugh.

This has been a challenging year for so many people and we realize this Christmas Eve, Christmas Day and Boxing Day are going to be much different than the ones we have enjoyed in years past. We wish our readers all the best for the season.

Please stay safe and well over the holidays and in the days and months to come as we continue to do all do our part in battling the COVID-19 pandemic.

Enjoy this Christmas Eve poem with a Beach spin to it:

THE NIGHT BEFORE CHRISTMAS (SORT OF)

Twas the night before Christmas and all through the beach,

Not a creature was stirring, not even a leech;

The hockey socks were hung from the renovations with care,

In hopes that St. Nicholas soon would be there.

The raccoons were nestled all snug in their beds,

While visions of garbage bags danced in their heads;

And the wife with her Spritzer an’ me with scotch,

Had just settled back to watch the Leafs botch.

When out on the street there arose such a clatter,

I leaped from the couch and nearly emptied my bladder;

To the stained glass window I flew like a gull,

And beheld a strange scene over which I did mull!

What to my wondering eyes should appear,

But Santa, on a streetcar, and 8 hulking reindeer!

“It’s bad enough with the DOGS around here!”

All donning Nikes, his coursers, they came,

And he whistled, and shouted and called them by name:

On Malvern, on Hamper! On Yoga and Yuppy!

And then in a twinkling, I heard on the roof,

The pawing and prancing of…a guy from the ‘Goof?’

“You’re at the wrong address!” I said with a roar,

“Deliver that Soo guy and Wonton next door!”

As I drew in my head and was turning around,

Down the chimney St. Nicholas came with a bound;

On his back was a sack filled up with neat stuff;

For the folks in the beach it was more than enough!

He had cat-toys for kitties, and acorns for squirrels,

Sail-boards and sports cars for boys and for girls;

He looked up at me and asked what I wanted;

I said “a Porsche!”… He looked undaunted:

With a wink, he reached into his bundle so heavy;

I laughed at his joke, he chuckled at mine;

I offered a beer but he had to decline;

“Thanks my friend, but I’m driving tonight!”

I heard him exclaim as he sped out of sight.

He headed down Queen St. and banked to the right,

Shouting: “MERRY CHRISTMAS TO ALL, AND TO ALL A GOOD NIGHT!!”