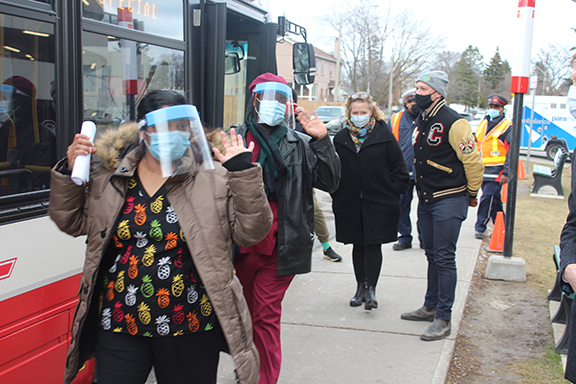 Frontline caregivers from Midland Gardens long-term care home wave as they arrive at Michael Garron Hospital for a COVID-19 vaccine shot on the afternoon of Tuesday, Dec. 22. They arrived at the hospital courtesy of a special TTC bus, and were greeted by MGH President and CEO Sarah Downey and Beaches-East York Councillor Brad Bradford. Photo by Alan Shackleton. Inset photo, Registered Practical Nurse Brigitte Pascual of Midland Gardens was the first to receive the vaccine at MGH. Photo by Kevin Holm.

Frontline workers from a long-term care home in southwest Scarborough were the first to receive doses of the Pfizer COVID-19 vaccine at Michael Garron Hospital (MGH) this afternoon.

A partnership between the TTC, the hospital, the City of Toronto’s Emergency Operations Centre, Beaches-East York Councillor Brad Bradford’s office and local long-term care operators brought the first recipients to the hospital on a special TTC bus.

Given the need to keep the vaccine stored at extreme-cold temperatures and security issues around transporting the doses, it was felt the best way to have the frontline workers vaccinated was to bring them in for their shots.

The shots this afternoon (Tuesday, Dec. 22) were the first to be administered by the hospital, said Michael Garron Hospital President and CEO Sarah Downey.

“We’re really happy the first doses of the vaccine are going to long-term care as people who live in congregate settings and those who care for them are the most vulnerable,” she said.

MGH is one of 17 hospitals in the province to receive a limited number of Ontario’s first available vaccine doses.

“It’s a first step,” Downey said of today’s vaccine shots. “People are desperate to get it and so are we to deliver it.”

The frontline workers receiving the vaccinations today were from Midland Gardens, and there were approximately 30 of them who arrived on a special TTC that took them to the hospital and back again. As they stepped off the bus on Mortimer Avenue they were greeted by Downey, Bradford and other dignitaries.

The first person to receive the vaccine from MGH was Brigitte Pascual, a Registered Practical Nurse (RPN) who has been caring for residents at Midland Gardens for the past 10 years.

Tomorrow approximately 60 staff and residents from other East Toronto long-term care homes will also be brought by bus to the hospital for their vaccinations, and 90 are planned for Dec. 24.

Downey pointed out there was a limited first batch of the vaccine for MGH, and when more comes depends on numerous factors most of which are controlled by the Ontario Ministry of Health.

As more vaccine arrives in the province and is distributed, she said MGH will work with its partners including Toronto Public Health and local doctors to get it into the arms of residents most in need.

Downey said the number of shots given will ramp up across the province as more vaccine becomes available.

“There’s a whole supply chain to work out. This is the largest public vaccination that anyone working in healthcare today has ever been involved in,” she said.

Bradford said bringing those who are most vulnerable to get their vaccine shots at the hospital took a lot of creative effort and hard work, and he praised all involved.

“There’s no playbook for this,” he said. “We wanted to get the first doses out to people in the east end of the city as soon as we could.”

EDITOR’S NOTE: This story has been updated to include a photo and the name of the first person to receive the vaccine at MGH.