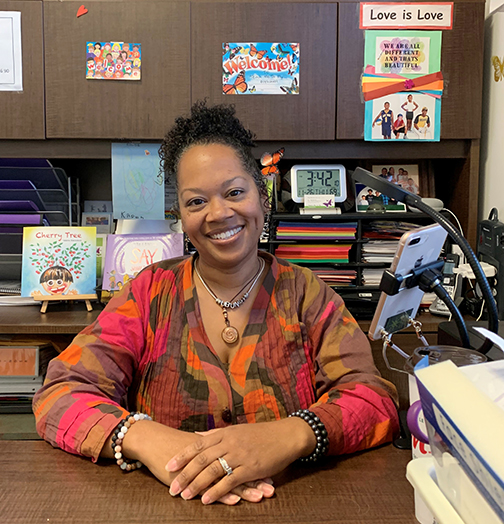 Community is made up of people, you can’t be a community on your own. We all need each other. Even in our ‘independence’ it’s not possible to do everything alone. This is especially true when it comes to raising children. Thankfully there are people like Eloise Morrison.

Eloise is a genuine person who radiates warmth. She’s exactly the kind of person you would confidently leave your children with, and many do. Eloise owns Teach Me to Fly Daycare on Clonmore Drive in the Upper Beach.

Eloise has travelled the world, but her roots have always been here in this neighbourhood. She lived on Bingham Avenue and attended St. John Catholic School. Life has taken her many places but her formative years took place here and when she grew up and her own family needed a place to settle, she returned.

Her mother is from Cape Town, South Africa and left during apartheid. Her dad was from Guyana and was only really initiated into the world of racism when he came to Canada.

All through elementary school, Eloise was the only Black girl in her class. Though she had friends she says, “I have been singled out. I felt different all the time because I didn’t have the same hair or skin. There were days that you just didn’t fit in or feel the same.”

After Grade 8, Eloise attended Loretto Abbey. Her experience there was much different, and she was amazed by the diversity. “There were so many Black girls” she said, “but the irony was I wasn’t ‘Black enough’ to fit in. That confused me so much. I’d just come from a school where I wasn’t white enough, and now I’m not accepted by the people I thought I would be.”

She ended up making many friends from all different backgrounds. “I grew up in a diverse family, so I never felt like I needed to be one particular thing.”

After graduating from York University with her degree in sociology, Eloise worked at an office for long term care. Through her brother’s encouragement she applied for and was accepted to the University of Buffalo to do her post grad in social work.

“I was in a humanities class one evening, when the professor said to the room, ‘I am more privileged than you’. The teacher was white and was addressing a class of white and Black students, but it was obvious she was speaking to the Black students. The way she said those words felt like she was talking down to us. I asked her many questions and in each of her responses I could see she didn’t really understand my experience. There was no context for her statement.”

By the end of class, Eloise had provoked enough that the professor apologized. Today we speak of “white privilege” in an informed and deliberate manner. The way her class was delivered that message left the white people feeling empowered and the Black people feeling denigrated. Fortunately, Eloise was able to find her voice and confront what was uncomfortable about that proclamation.

Communication is where many relationships break down. Intellectually we know this to be true, but when faced with pride, fear, or insecurity it becomes much harder for people to be open to real dialogue.

When Eloise and her husband Darien moved their family to Canada from Buffalo, she was inspired to open her own daycare.

The daycare started in their home, but as the business grew, the children needed more space and programming. In 2007, they opened Peek A Bears Daycare at Woodbine and Gerrard. “I didn’t plan on opening daycare centres, but I wanted to be with my sons,” said Eloise.

Unfortunately, life wasn’t so straightforward. The Ministry of Education assigns a programming advisor to daycares and the person responsible for Peek A Bears relentlessly made life difficult, Eloise said. “I gave my heart and soul to my work. I was doing a great job, the parents all loved us, but she still gave us negative reviews.”

During this complication, Eloise still managed to open her second daycare, Teach Me to Fly on Clonmore in 2010. The same advisor was assigned to the new location. As the situation escalated, Eloise became physically ill from the stress and eventually had to hire a lawyer. The case went through mediation and court, and it was officially recognized that Eloise was in the right. When the advisor returned to review her again there was a dramatic change in attitude, Eloise said.

The nightmare was over, but the reality remained. The white staff and parents of the centre told her they were certain the unfairness was racially charged. It was validating to hear that she wasn’t alone in her suspicions, but as is often the case, there was no way to prove the racism.

Early on, one of their boys was singled out at school by a teacher. “The teacher said he had to repeat junior kindergarten. Nobody repeats JK,” she told me.

Eloise had never witnessed any evidence of the teacher’s claims, but she took the opportunity to sit in their classes and observe for herself. “I saw other white children being dragged to school kicking and screaming with all kinds of behavioural issues, but they wanted to single out my son? I met with the principal, but it accomplished nothing. I pulled him from that school and registered him at St. John’s.”

After a while, a similar situation occurred. “It was so frustrating. I pulled all three boys, and we sent them to a Montessori school in Markham.”

Academically the boys thrived at the private school and after four years they returned to St. John’s so their son could graduate with his Grade 8 class. “They did just fine. I have no doubt this happened because we are a family of colour.”
Again, this was a case where racism was hard to prove. To be clear, racism is prejudice against someone based on their race. People are quick to be offended by the term, but it would be unrealistic to assume or claim that none of us possess any prejudice. Sometimes racism isn’t so covert. Sometimes it’s right there under our nose.

“When I opened Peek A Bears, I second guessed myself, I hired white people to reflect the demographic. I also had a few people of colour that were supply staff. Little did I know, the people of colour were being treated horribly by the white staff. It went on for a very long time, and when I finally found out I was heartbroken; I myself am a person of colour but the victims didn’t feel comfortable enough to tell me. One woman later confessed she used to drive down to the beach at lunch to get away and go home at night crying,” said Eloise.

“I immediately fired the ringleader and held a meeting with the remaining staff. I pointed out that they were teaching the children to disrespect people of colour. They admitted their part in the harassment and apologized. Things did change but I was horrified that it happened.”

People at all levels of power have a responsibility. Eloise saw what needed to be done and took charge. Our society depends on these people to look out for them, and ultimately try to level the playing field for everyone. When an individual in this position fails to do so, they contribute to the failure of the whole.

“My son had been told by a teammate, ‘You’re just here because you’re Black. All Black people are good at sports’. I approached the principal and asked if there could be a platform for bullying and education. A place to have communication and dialogue. The principal said, ‘We’re already doing that’, and brushed me off. I had no idea what he was referring to, but he clearly wasn’t interested in continuing the conversation.”

Thankfully, others in our community are ready to begin the discussion. Earlier this summer a group of devoted Beachers participated in a Black Lives Matter march.

At the end of the march, the organizer asked if anyone wanted to say something. Eloise looked around and thought, “these people came out to support us, I should say something. I don’t remember what I said, but I felt a weight come off my shoulders. Afterward people came up to thank me and ask more about my story. I didn’t think anyone would care, but people were listening and they did care.”

Since that first march, Eloise has continued to find her voice and is inspired to keep sharing her story. “My mother is close with Bishop Desmond Tutu and through him I learned about Ubuntu: I am because we are. This means, I can’t just seclude anybody from my life story. I am not who I am, without everyone.”

When you walk into Teach Me to Fly now, you see the diversity of the staff and the happiness of all who enter.

“We celebrate everything and every culture. Desmond Tutu also taught me that if you live your life with love and peace, there’s nothing you can’t get through. Truth and reconciliation are so important, that process can bring so much understanding and forgiveness. We can’t take on other people’s anger, but maybe we can teach them something. We’ve got to be the change and move forward together as a community.”

I am because we are.