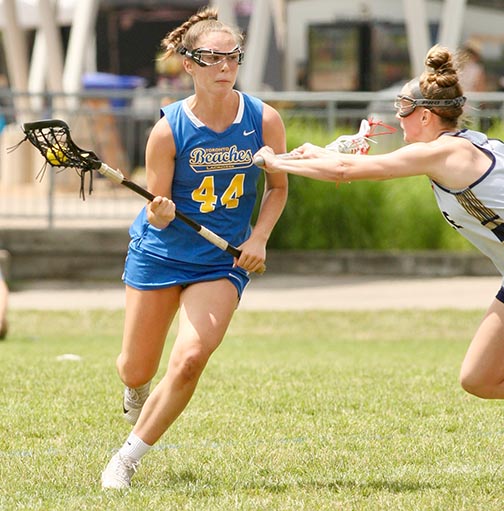 Reilly Hunter is set to begin a lacrosse scholarship at San Diego State University in the fall of 2021. Photo by Paul Hunter.

Though delayed by a season due to the COVID-19 pandemic, Beach resident Reilly Hunter is looking forward to starting her lacrosse scholarship at San Diego State University (SDSU) in 2021.
Hunter, 18, was set to start her first year at the California university this fall but was that put on hold by the pandemic. She was making plans this summer to start attending, but the COVID-19 situation in California put a stop to that.

“It was only about two weeks before I was supposed to leave in August that my coaches found out that due to COVID-19, the California university board was no longer allowing first-year international students to come to campus and my F-1 Student Visa was cancelled by the university,” she said.

It was a huge disappointment at the time for Hunter, but she has kept busy training locally this year and will continue to do so in 2021 prior to her start at San Diego State at the age of 19.

“I was obviously really upset when this happened but it has given me an opportunity to have this year to keep training, as my freshman year is now deferred to 2021,” said Hunter.

A Beach resident her entire life, Hunter attended Williamson Road and Glen Ames schools, before going to high school at Birchmount Park Collegiate which has special programs for athletes.
As a child she played a number of sports including lacrosse, hockey, cross country, and track and field.

“I think playing as many sports as possible for as long as you can is really beneficial to being a better athlete and a better player in whatever sport you decide to focus on,” she said.
Hunter started playing with Toronto Beaches Lacrosse 13 years ago and continues to do so. She also played hockey with the Leaside Wildcats, but decided to make lacrosse her main focus when she was in Grade 11.

Along with playing lacrosse for Toronto Beaches, Hunter has also been a member of the Team Ontario squad for the past five seasons.

“Playing for Team Ontario was a huge help in getting a scholarship at San Diego State because I had the opportunity to play for some of the best coaches in the province which had a great impact on my development,” said Hunter. “With Team Ontario, we travelled to various recruiting tournaments around the United States where we could be seen by NCAA (National Collegiate Athletic Association) coaches.”

She said she decided to accept a lacrosse scholarship at San Diego State for a number of reasons.

“I decided on SDSU because of the increase in success the team has every year and from the minute I stepped on campus for my visit, the coaches and players were so welcoming and made me feel like family. Overall, it just seemed like an environment where everyone wants you to succeed whether it’s on the field or in the classroom.”

She admitted the location of the campus and the war, sunny Southern California weather played a role in her decision. She plans to study kinesiology at San Diego State.

“I am very excited to have this opportunity to play in the NCAA, especially in California because it is going to be a completely new atmosphere and I think the whole experience is going to be amazing.”

If Hunter needs advice on what to expect as a Canadian athlete in the U.S., she can look to the experiences of her mother Mary Ormsby.

“My mom had a very successful volleyball career. She played for the Canadian National Team, competed for four years at The Ohio State University (OSU) and was later inducted into the OSU sports hall of fame,” said Hunter.

“My mom has always been very helpful, not just in the recruiting process, but also in being a role model and someone I can look up to in all aspects of life.”

Sports is a big part of life for the Hunter family. Along with being a top athlete, Ormsby was also a sports reporter (and now editor) for for the Toronto Star as was Reilly’s dad Paul Hunter.

“They were constantly working with professional athletes which made them a huge help when it came to advice and knowledge of the sports world,” she said.

She said the support of her family and the many coaches and teammates she has had over the years has been crucial in helping her to be able to get to the point of playing lacrosse on a sports scholarship at San Diego State.