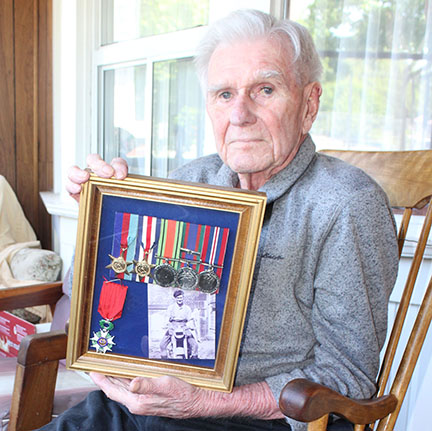 Guy Eisnor, 96, lived in the Upper Beach area for more than 65 years. A Canadian army veteran of the Second World War, he died at the age of 96 on Remembrance Day, Nov. 11.

Local veteran Guy Eisnor, who served in the Canadian army during the Second World War and took part in the D-Day invasion, died on Remembrance Day at the age of 96.

Born in Nova Scotia in January of 1924, Eisnor lived in the Bowmore and Wrenson roads area for more than 65 years.

“My grandad was a great man, a true Canadian. He was kind, proud of his service, full of stories and had a smile that would light up a room,” his granddaughter Emily Eisnor told Beach Metro News.

“My grandad never lacked love since his family was his life until his last day. We will miss him beyond measure but we are thankful that through life and now death, Remembrance Day will always be his. We will never forget.”

Eisnor married his wife Margaret O’Neill in July of 1951, and they moved into their house on Wrenson Road in 1954.

In an interview with Beach Metro News in June of 2019, on the 75th anniversary of the June 6, 1944 D-Day invasion of Europe which led to the end of the Second World War, Eisnor remembered how he first met Margaret shortly after starting work at the Canada Wire plant in Leaside.

“There were women working there and I fell in love with her the first time I saw her,” he said of his wife who came from a family of 12 – seven girls and four boys.  “All of the girls were beautiful, but I got the prettiest one.”

The couple raised their seven children, four boys and three girls, at their Wrenson Road home. Margaret died in 1999, but Eisnor continued to live at the house for the rest of his live with one of his sons.

Beaches-East York MP Nathaniel Erskine-Smith paid tribute to Eisnor and his service to Canada during a speech in the House of Commons in June of last year.

“He is one of a smaller number of surviving World War Two veterans of the Juno Beach invasion,” Erskine-Smith told the House. “We played cribbage together, a game he told me he learned to play in the foxhole, and we talked about his service, his life, and his belief that Canada is the best country in the world. It is, and it is because of men and women like him. We owe Mr. Eisnor and all those who served in World War Two a debt of gratitude.”

In a statement on Twitter this week, Erskine-Smith expressed his condolences to the Eisnor family. “It’s hard to fully appreciate the immeasurable service of people like Mr. Eisnor. I value and will always remember the moments he shared with me, and my thoughts are with his family.”

Eisnor joined the Canadian army in 1941 at the age of 17, leaving his home in Brickton, Nova Scotia.

His mother could have stopped him as he was under 18, but he told her not to.

“I told my mother I was going to join up. I told her it was what I wanted to do and I asked her to please not interfere,” he said in the June 2019 interview with Beach Metro News. Eisnor served with the 45th Armoured Transport Division and was a motorcycle despatch rider who passed on messages between units in different areas. “I was the telephone. The telephone on wheels. I smashed up a lot of motorcycles,” he said.

He also remembered crossing the English Channel prior to landing on Juno Beach in the days immediately following D-Day.

“The Chanel was rough so a lots of the guys got seasick, but I was from out east and I didn’t mind the waves,” said Eisnor. “I think they would have been happy to jump into the water just to get off the boat.”

In Europe, he served with the Canadian army as it made its way through France, Belgium and Holland during the liberation of Europe. He remembered spending time in Amsterdam and that people there were starving at the time of liberation. Eisnor said the people of Holland still appreciate to this day what Canadian soldiers did during and after the liberation.

He found out about the end of the Second World War while in a town near the border of Germany and Denmark.

“It was the German civilians who told us the war was over. I was driving in an armoured car at the time and they came out saying the war is over, the war is over,” Eisnor remembered.

Once he returned from military service, Eisnor spent a year in Nova Scotia and then headed west. He stopped in Toronto when he was running low on money, met some army buddies who told him Canada Wire was hiring and decided to apply. That changed his life as it was where he met his wife Margaret. Eisnor worked at Canada Wire for 44 years.

Among the honours Eisnor has received for his military service was to be named a Knight of the French National Order of Legion of Honor which was presented to him in August of 2016.