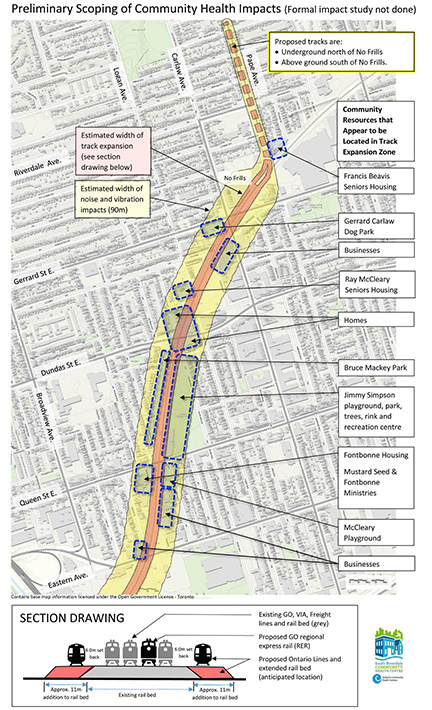 This map shows the Ontario Line's proposed route running south, then west from Pape and Danforth avenues. The wider yellow portions shows where the line is proposed to run above ground, starting at approximately Pape and Gerrard. The map also shows local housing, parks and important places in the neighbourhood that would be impacted by the above-ground route.

Plans for the Ontario Line subway to run above ground through neighbourhoods in Riverdale, Leslieville and Riverside has local residents very upset.

Formally known as the Downtown Relief Line, the Ontario Line will aim to reduce congestion on the existing subway lines (Line 1 – Yonge-University, and Line 2 – Bloor-Danforth). It will also relieve congestion at Yonge-Bloor station, one of the locations where those two lines cross.

The East End Transit Alliance (EETA) is very concerned about plans for the Ontario Line to run above ground southwest of Pape and Danforth avenues. Many businesses, homes, parks and the Jimmie Simpson Community Centre near Queen Street East and Broadview Avenue will be impacted, the alliance said.

“Building an above ground subway through some of the densest residential communities in Toronto makes no sense,” said Amrita Takhar, who is organizing a petition calling for the Ontario Line to run underground through the East Toronto area.

Plans for the line by the Toronto Transit Commission (TTC) had been underway for a number of years before Premier Doug Ford announced in 2019 that the province would build the Ontario Line and run it from the Ontario Science Centre to Exhibition Place. When announced, the province said the line would be finished by 2027. The announcement was part of a number of transit plans released last year by the provincial government.

“If the Ford Government is prepared to build a subway in Scarborough and an underground LRT in Etobicoke, then it should support burying the Ontario Line,” said Takhar in an EETA release from Oct. 26.

Riverside resident Eon Song signed the petition and said in the EETA release that running the Ontario Line above ground through the area will destroy the elements that make the community unique.

“Instead they should be looking for ways to reduce community impact and protect these thriving neighbourhoods full of transit riders who should ultimately benefit from the new infrastructure. There are a lot of very frustrated people in this part of the city,” said Song.

Some of the concerns outlined in the petition include negative impact on green spaces and parks including Jimmie Simpson Park, Bruce Mackey Park, McCleary Playground, Gerrard Carlaw Dog Parkette, and the South Riverdale Parkette at Gerrard and Carlaw.

An underground option would minimally impact these spaces, the petition said.

For more information on the East End Transit Alliance and the petition, please go to http://www.eastendtransit.com/