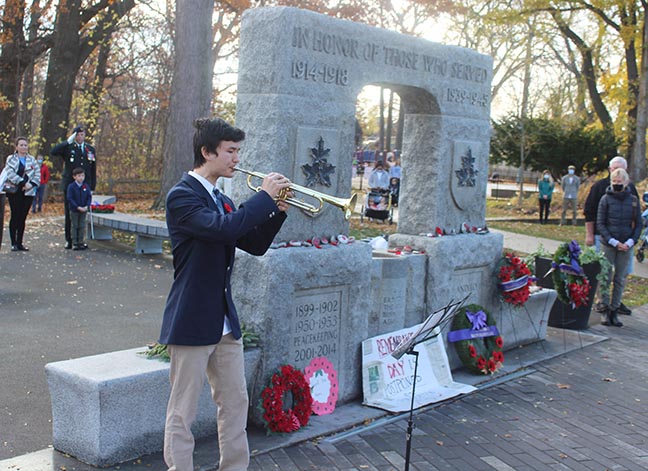 Graydon Power plays at a Remembrance Day gathering in front of the Kew Gardens Cenotaph on the morning of Nov. 11. Inset photos: Warren Cherry and his son Walker, 3, lay a poppy on the cenotaph; Paul Szabunio, son Hudson, 5, and wife Anna lay a wreath. Photos by Alan Shackleton.

Though there was no official Remembrance Day ceremony due to the COVID-19 pandemic, more than 100 Beach and area residents came out to the Kew Gardens Cenotaph on Queen Street East on the morning of Wednesday, Nov. 11, to pay tribute to those who served for our freedoms.

Local resident Graydon Power took it upon himself to bring his trumpet and play the Last Post and Reveille to give the impromptu ceremony some focus as those taking part observed the moment of silence at 11 a.m.

“I thought it would be a good idea to come and play,” he said.

Prior to 11 a.m. a number of people and organizations laid wreaths at the Kew Gardens Cenotaph including the Beach Village BIA and The Beach and East Toronto Historical Society.

After the moment of silence and a round of applause for Power, people began to lay the poppies they had been wearing on the cenotaph. Warren Cherry and his son Walker, 3, were among those doing so.

“We felt it was a good way to remember my grandfather who fought in the Second World War,” said Warren. “It’s also important for children to know how important it is and that it’s why we have everything and can live the life we do today.”

His grandfather’s name was Bud Cherry, and he served with the Canadian army and took part in the liberation of Holland.

This year, marks the 75th anniversary of the end of the Second World War.

Also attending on Wednesday morning was Beach resident Paul Szabunio, a Canadian army veteran who still serves as a Lieutenant-Colonel in the reserves. He was there with his wife Anna and son Hudson, 5. They laid a wreath at the cenotaph after the ceremony.

Szabunio, along with former Canadian Minister of Defence Peter MacKay and with the help of Beach historian Gene Domagala and Beaches-East York Councillor Brad Braford, was able to get a recognition of Canada’s Afghan Mission and the Boer War engraved on the Kew Gardens Cenotaph earlier this month.

He said he was not surprised to see a strong turnout of residents at the cenotaph this morning even though nothing official was taking place due to the pandemic. “I’m not the least bit surprised,” said Szabunio. “It was wonderful to see so many people make the effort.”

He pointed out that last week’s controversy surrounding a brief ban on allowing its employees to wear poppies at work by American grocer Whole Foods brought into sharp focus exactly how much Remembrance Day means to Canadians.

“The concerns over the wearing of the poppy last week with one of the retailers underscored how important Remembrance Day is, and I knew there would be a lot of people coming out.”

The weather for this year’s Remembrance Day could not have been more different that in 2019. This year saw sunny skies and warm temperatures, while last year’s large crowd at the Kew Gardens Cenotaph stood through a steady snow storm and cold temperatures.

Today’s clear skies meant those attending were able to look up and see a fly-by prior to the ceremony by a C-130 military aircraft and then a squadron of Harvard aircraft flying in the “missing-man formation” afterwards.

Remembrance Day was also observed locally at the Royal Canadian Legion Baron Byng Branch on Coxwell Avenue with a ceremony for Legion members and dignitaries that could not be made open to the public due to COVID-19 safety protocols.