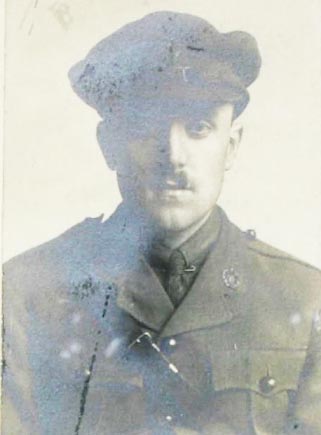 Lt. John Dashwood died during the fourth day of the battle for Vimy Ridge in the First World War. Inset photo is a newspaper account of his death, mentioning that his parents lived on Kingston Road.

By MARCUS A. NICOLETTI

For more than 100 years, the Dashwood family has called the Beach home. Along with practicing law, many Dashwoods have served in the Canadian military in times of conflict.

During the First World War, brothers Fred and John volunteered for active duty serving in France.

Fred was sent overseas in 1915 and served in the trenches as an engineering officer.

He was responsible for keeping communication lines open and preparing defences throughout the bloody battle of the Somme.

As an infantry officer in the 58th Battalion, Lt. Dashwood was wounded in action during the 2nd battle of Ypres in 1916.

A year later, the 58th was one of many units that attacked strong German defences at Vimy Ridge. The battle of Vimy Ridge in 1917 is often seen as one of Canada’s greatest achievements of the First World War. It saw Canadian forces break through German lines that were once thought to be unbeatable. Leading an advance party into German trenches at Vimy, Lt. Dashwood was killed in action on the fourth day of the battle.

For his actions that day, he was posthumously awarded the Military Cross, the second highest award for valor in the British Commonwealth.

We know much about their service from the rich collection of personal records, diaries, and photographs that attest to their sacrifice and are still held by members of the family.

After the War, Fred set up law offices on Kingston and Scarborough roads where the family-run practice continues to this day.

Stories similar to the actions of the Dashwood brothers are numerous among other Beach residents who served in the Canadian military.

Special thanks to Geoff Dashwood and to the Dashwood family for without their permission, this record would not have been documented.