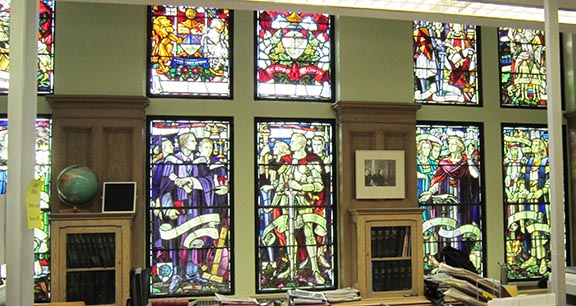 Danforth Collegiate and Technical Institute's War Memorial Library and its stained glass windows. Inset photos show illuminated panels with name of those who served and brass plaques with names of those who were killed. Photos: Submitted.

With Remembrance Day taking place tomorrow (Wednesday, Nov. 11) Danforth Collegiate and Technical Institute will remember the more than 2,300 students and staff who served Canada in the Second World War.

With 2020 being the 75th anniversary of the end of the Second World War, this year’s Remembrance Day is even more meaningful.

However, as with other public events across the country that have had to be cancelled this year due to the COVID-19 pandemic, there will not be a large ceremony to mark the day.

However, Danforth Collegiate will still pay tribute to those who served and those who made the ultimate sacrifice. The school, located on Greenwood Avenue just north of Danforth Avenue, has a number of illuminated panels designed by Group of Seven artist A. J. Casson with the names of those who served.

The school also has a War Memorial Library with stained glass windows and with bronze plaques engraved with the names of the 240 Danforth students and one teacher who were killed while serving in the Second World War.

The library, plaques and panels were unveiled at the school in May of 1948 with a huge crowd in attendance.

Further research over the years has indicated that there were another 16 names which should have been included on those plaques, the school said.

Opened as Riverdale Technical School in 1923, the school’s name was changed to Danforth Technical School in 1932. It has the distinction of having the greatest number of students, graduates, teachers and other staff to have volunteered for military service or the merchant navies in the Second World War of any school in the British Commonwealth.

Among those from Danforth Collegiate who were killed in the Second World War are former music teacher Ivor Baldwin and former female student Maud Steane. She was killed in Naples harbour while serving as a radio officer on a merchant vessel. “Danforth’s students and staff served in many different theatres of war in all branches of the Armed Forces and the Merchant Navy throughout the war including Iceland, the U.K., North Africa, Sicily, Italy, France, Belgium, Holland, Germany, Hong Kong, India, Burma, and Malaya, to name some, as well as here in Canada and Newfoundland (then considered overseas service because Newfoundland was not part of Canada at the time),” said Ron Passmore in a note to Beach Metro News.