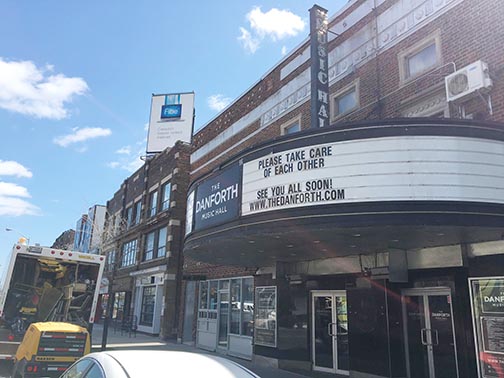 Many small businesses along Danforth Avenue are feeling "ripped off" by lack of provincial government support as they continue to deal with the COVID-19 pandemic, says Toronto-Danforth NDP MPP Peter Tabuns. Photo by Alan Shackleton.

Released on Nov. 5, Premier Doug Ford and Finance Minister Rod Phillips lauded the budget for addressing the COVID-19 pandemic and the subsequent economic recovery expected to follow. The budget is $187 billion in total expenses.

Of that, $30 billion is meant for pandemic spending. It also brings Ontario to its largest deficit on record of $38.5 billion. The province is forecasting lower deficits in 2021 and 2022, provided economic growth continues at a modest rate.

Criticism of the budget comes from those concerned with a perceived lack of spending on COVID-19 measures, a relatively small increase in education spending, its long-term care plan, and small business relief that doesn’t go far enough.

“I’m not seeing any money for contact tracing, improved testing,” Toronto-Danforth NDP MPP Peter Tabuns said. “Frankly, if you’re not doing those things you’re setting the stage for a ramp up for more infections and a possible lockdown later.”

The province said it is spending $2.5 billion this year on hospitals to help fight the pandemic, with an additional $572 million for costs incurred over the second wave.

It also calls for capping class sizes to 15, citing growing cases in schools. The province instead has offered parents with children in at-home education $200 in support per child under 12 and $250 per child or youth with special needs to cover expenses like workbooks and school supplies.

Instead, the province wants seniors to live at home longer. The budget offers a 25 per cent reimbursement for eligible renovations of up to $10,000 for installing wheelchair ramps, non-slip flooring, and additional light fixtures.

“I have a hard time believing they have a commitment to providing support for seniors,” Scarborough-Southwest NDP MPP Doly Begum said, who expressed disappointment in what she said was a reduction in long-term care spending from $4.63 billion to $4.53 billion.

On the economic front, the province introduced a set of tax breaks and hydro bills subsidies (for medium to large businesses). Which means small businesses in East Toronto with payrolls under $1 million won’t have to pay the Employer Health Tax.

The Business Education tax, a property tax allocated for education expenditures, will have a reduced rate. The City of Toronto will be permitted to reduce property taxes for small businesses, and the province will consider matching the reductions.

“They wouldn’t be able to pay them anyways,” Tabuns said. “Talking to businesses on the Danforth, they tell me what they need is cash. A lot of small businesses feel like they’ve been ripped off.”

East Toronto’s elected officials at Queen’s Park cited evictions – both commercial and residential – as a growing problem as a result of the pandemic. A provincial retroactive moratorium on commercial evictions was issued on June 3, 2020 and ended in October.

“Tax cuts down the line don’t help if your doors are closed,” Beaches-East York NDP MPP Rima Berns-McGown said. “It [the budget] really is a disaster and it’s going to end up costing us much more in the long run.”

“Instead of investing to protect the people of Ontario, especially our seniors, or ensuring our schools are safe, the Ford government seems more concerned about tax cuts to employers, and improved access to booze and gambling,” OLF president Patty Coates said.

Coates is referring to the new changes in the budget permanently permitting alcohol as a takeout or delivery option, and new rules to establish online gambling in response to a massive loss in revenue for the Alcohol and Gaming Commission.

“We had hoped to see significant base budget increases across the board for hospitals, long-term care facilities, community, and public health,” ONA president Vicki McKenna said. “Unfortunately, this was not addressed adequately. What the government is proposing for hospitals, for example, will not even cover existing deficits.”

“Without a commitment to fully cover these deficits, it will be impossible to maintain health-care services and protect the workforce,” she added.