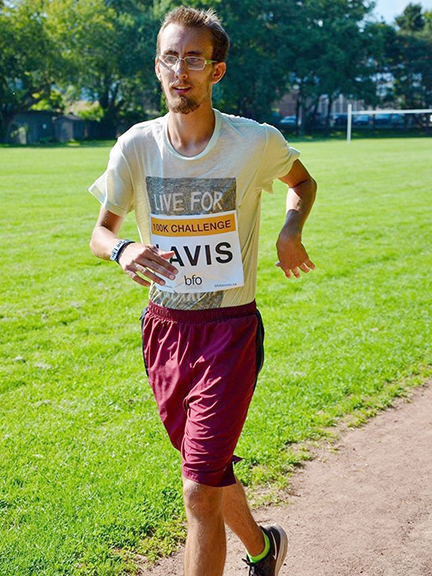 Beach resident Russell Lavis will be taking on an ultramarathon run of 100 kilometres around the East Toronto area this Saturday, Nov. 7, to help raise funds for World Vision Canada.

The run will take Lavis approximately 15 hours to finish. The route he will be running is a 20-kilometre loop centred around the Tommy Thompson Park area, and he will complete five laps of the circuit.

Over the years Lavis, who has lived in the Beach since the age of 14 and attended Neil McNeil Catholic High School, has taken part in other ultramarathon runs in order to help raise funds for a number of causes and organizations.

“It has been an absolute pleasure to support many different causes in my marathons/ultramarathons (such as Civic Coalition for Palestinian Rights in Jerusalem, Sick Kids Hospital through the Isolation Run Movement by Good Times Running and BFO Toronto),” said Lavis, 27, in an email to Beach Metro News this week.

“I selected World Vision Canada because I have a real heart for the work that they do. I’ve seen the impact and it’s impressive. They’re all in when it comes to helping some of the world’s most vulnerable people—especially children. They get to the root of some very tough issues and find sustainable solutions. Some of these kids are in extremely difficult situations; the adversity they face on a day-to-day basis far exceeds the adversity that I will personally face in my 100K ultramarathon on Saturday.”

World Vision Canada is a global relief agency, development and advocacy organization that empowers children, their families and communities to overcome poverty and injustice. More information on World Vision Canada can be found at https://www.worldvision.ca/

Lavis got into marathon running in 2018 through friend Louis Longo.

“When I talked to Louis, he mentioned how he thought and believed I could become a good runner. I started with a 5K, moved up to 10K, and within a couple months I had run my first half marathon,” said Lavis.

“From there, I was hooked on running which has led me to eight marathons and four ultramarathons (max of 70K so far) in more than two years of running.”

Lavis said he enjoys running for many reasons.

“I clearly enjoy it for fundraising, along with other reasons such as feeling spiritually free from the stresses of life, maintaining fitness, testing my own personal limits and the running community as a whole is so welcoming and inviting. There are some truly incredible people in the running world. Finally, I believe for myself personally that I was born to run through what I’ve learned these past two years.”

Lavis said he likes the scenic aspects of Tommy Thompson Park (the Leslie Street Spit), which is one of the reasons why he included it in the run he will be doing on Saturday.

“The trails in there are absolutely spectacular with some amazing views. It is a Beaches gem.”

To support Lavis on his run and to make a donation to World Vision Canada, please go to https://worldvisioncan.akaraisin.com/Donation/Event/DonationInfo.aspx?seid=23461&mid=48