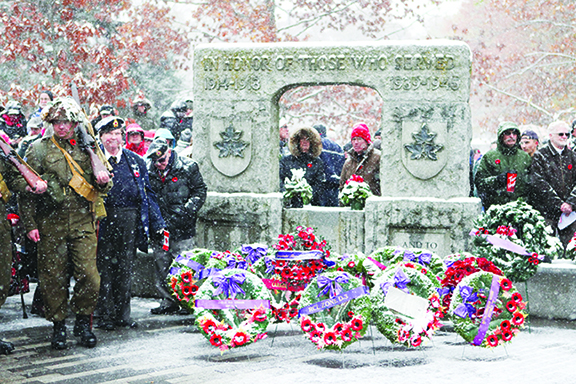 Last year's Remembrance Day ceremony at the Kew Gardens Cenotaph in the Beach drew a big crowd despite the snowy weather. This year there will be no formal, in-person Remembrance Day ceremonies held for members of the public in Toronto due to the COVID-19 pandemic. Beach Metro News file photo by Phil Lameira.

Local residents will have to commemorate Remembrance Day virtually this Nov. 11, as the City of Toronto has announced no public ceremonies will be held due to COVID-19 protocols.

In East Toronto, generally three major ceremonies take place in Toronto-Danforth, Beaches-East York, and Scarborough-Southwest. This year, however, the pandemic has forced a change of plans.

In Toronto-Danforth, Councillor Paula Fletcher will attend a shortened ceremony with limited participants at the cenotaph at the East York Civic Centre at 850 Coxwell Ave.

“Remembrance Day is an important day where we honour those who served and those who continue to serve,” Fletcher said. “This year we won’t be able to meet in person for the East York Remembrance Day Ceremony but we can participate in virtual commemorations. We can also take a moment of silence to pay our respects no matter where we are.”

The City of Toronto commemorates Remembrance Week from Nov. 5 to 11. This year all events will be virtual and be made available to watch via the city’s website and social media.

In Beaches-East York, residents usually gathered at the Kew Gardens Cenotaph for a commemoration with the Coxwell Legion branch. Beaches-East York Councillor Bradford’s office confirmed that Royal Canadian Legion branches 001/042, 22, and 11, all in the neighbourhood, will host their own smaller virtual events as well. The events are small, and invite-only for in-person participation.

This year residents will be able to watch a livestream of a smaller service at the branches. The stream of the Coxwell service will be shown via Councillor Bradford’s social media.

Bradford is also accepting 30-second videos of community members commemorating Remembrance Day from home. It will be included in a compilation video that will be shared in the community. Residents are asked to send videos to councillor_bradford@toronto.ca before Friday, Nov. 6.

In Scarborough Southwest, Councillor Gary Crawford generally attends a ceremony at the Scarborough Cenotaph at the junction of Kingston Road and Danforth Avenue, but as the same protocols apply there will be no public gathering in the ward.