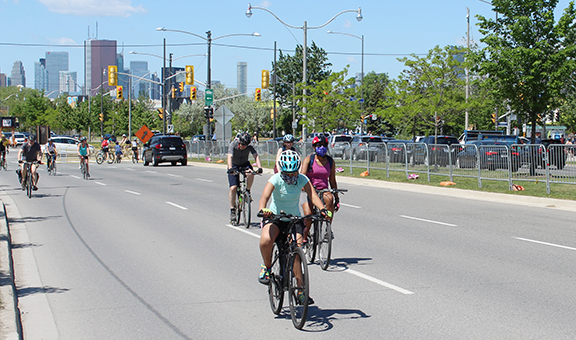 Cyclists ride in the eastbound lanes of Lake Shore Boulevard East between Leslie Street and Kew Beach Avenue earlier this year as part of ActiveTO.

After a successful summer run, the city of Toronto has extended ActiveTO weekend road closures into October.

ActiveTO closures were implemented as part of the city’s response to COVID-19. Road closures along busy streets and trails have allowed thousands of residents to be outside for the summer with ample space allowing for physical distancing.

The decision to extend the program into October resulted from recent changes in public health advice. Toronto Public Health advises residents to reduce contact and keep at least six feet apart with people who are not from their household in response to growing cases of COVID-19 in the city.

“The program was such a success that we extended it past Labour Day and now we’ve worked with city staff to continue the program into October,” Mayor John Tory said in a city press release announcing the extension into October.

“I encourage residents to get outside and enjoy the ActiveTO routes again this weekend,” he said.

In other parts of Toronto, the following road closure will be in effect:

Residents planning to use the roads for ActiveTO activities are encouraged to access them by bicycle or as a pedestrian.

From May to September, the city closed at least one major ActiveTO route for 20 consecutive weekends. The program is expected to be modified in 2021 with findings from this year.