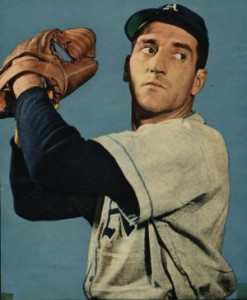 Phil Marchildon, who played Major League baseball with the Philadelphia Athletics, lived in the Beach and played in the Beaches Fastball League at the Kew Gardens ball diamond in the 1950s. Inset photo: Jack Kent Cooke, who attended Malvern Collegiate, owned the Toronto Maple Leafs baseball team among other pro sports clubs he would later own.

Below is Chapter 12 of BOOM: A Child of the Beach in Toronto Remembers the 50s.

Every Tuesday over the next few months, Beach Metro News will post up another chapter of the book on our website at https://beachmetro.com/ for readers to enjoy.

To see our earlier story on Black, and to read Chapter One, please go to https://beachmetro.com/2020/07/14/former-residents-book-looks-back-on-growing-up-in-the-beach-in-the-fifties/

Hard copies of the book BOOM: A Child of the Beach in Toronto Remembers the 50s are now available locally at Book City on Queen Street East and Danforth Avenue and at The Great Escape Book Store on Kingston Road. For more information on the book or to order a copy, please contact Black at kandjomemee@gmail.com

BOOM: A Child of the Beach in Toronto Remembers the 50s

CHAPTER 12: ‘The smelts are running’

While trips to Niagara or the islands or to the airport or Auto Show were great, we certainly had enough to see and do to keep us occupied in the Beach.

And, occasionally I managed to get paid while being entertained. On Monday, Wednesday and Friday evenings from May through September, a group of guys would gather on the Kew Gardens ball diamond. A few of them could walk to the pitcher’s rubber and actually throw a softball underhanded in excess of 80 miles per hour, and some of the other guys who were only 46 feet away could hit it!

This was the Beaches Major Fastball League; it was good, it was seriously competitive and, on average, more than 2,000 people showed up to watch.

Some of the players had joined the league after completing their Major League careers like Goodwin (Goody) Rosen who played for the Dodgers and the Giants and had a batting average of .291 over six seasons, and Phil Marchildon who pitched for the Philadelphia Athletics for eight years with an earned run average of 3.93. He lived on Glen Ames in the Beach.

Most Fridays I was in the stands peddling pop or hot dogs while keeping one eye on the field. On Sep. 3, 1958, 5,000 fans showed up for a double-header, the first game of which was between Turk Broda’s NHL old-timers and a team of the Beaches league old-timers. Bill Durnan, Harry Watson, Cal Gardner, Lou Fontinato and Sid Smith, who lived on Queen Street at Fallingbrook and then on Glen Manor Drive were among the NHL players.

The second game saw Swiss Chalet defeated by Oshawa Tony’s behind the pitching of legend Charlie Justice who had helped the Tip Top Tailors team to the world championship in 1949. It was a lucrative night for me.

Some evenings when I wasn’t working, I would watch the games from a perch high up on the large frame scoreboard out in centre field. A friend of mine had the job of manipulating the numbers on the board. They were pleasant nights.

I wish that I had been in the stands on Aug. 26, 1951 when more than 7,000 attended a game between B-A Motors and Eddie Feigner’s team, The King and His Court. Feigner’s team had just four players: a pitcher (Eddie), a catcher, a first baseman and a shortstop. The King won the game   3-2. Feigner should get more recognition as being one of the greatest baseball players of all time.

In an exhibition match 16 years later, he faced Willie Mays, Willie McCovey, Brooks Robinson, Roberto Clemente, Maury Wills and Harmon Killebrew in succession. He struck out each and every one.

The Beaches Major Fastball League died too, and it was a slow lingering death. It was killed by a combination of factors including the ever-increasing presence of baseball on TV, particularly after the birth of the Expos and then the Blue Jays. Even the advent of home air-conditioners played a role in its demise; many of the fans had gone to Kew Beach to enjoy the cool breezes blowing in from the lake.

There were cool breezes blowing in at the other ball park in Toronto that I went to a few times in the latter part of the decade. Maple Leaf Stadium at the foot of Bathurst Street seemed immense to me although it only seated about 23,000 and I thought that it was grand.

I didn’t follow the Maple Leaf ball team very closely but I did check regularly to see how my favourite players were doing — first baseman Rocky Nelson and the pitcher Pat Scantlebury who toiled for years in the Negro Leagues and played eight games with the Cincinnati Reds before arriving in Toronto at age 40. In the Fifties the Maple Leaf ball club was owned by Oley Kent who grew up on Neville Park Boulevard in the Beach. Oley, who had dropped out of Malvern Collegiate, was pretty handy with a clarinet as well as a saxophone and in the 1930s he had his own orchestra which sometimes went under the name Oley Kent and his Bourgeois Canadians. They often played at dances held at the Balmy Beach Club at the foot of Beech Avenue and at other venues throughout Toronto including the Hollywood Inn in the west end.

Eventually, Oley left the music world and created an empire in radio stations, newspapers and sports franchises, the Maple Leafs being his first of many such acquisitions. You may not recognize the name because Oley Kent was a stage name. His real name was Jack Kent Cooke.  He died in Washington, D.C. in 1997 leaving behind the Jack Kent Cooke Foundation which annually awards scholarships. Its current assets total about $700 million.

Around the beginning of April each year, the word would go out that “the smelts are running”.  This always seemed like a ridiculous statement to me. What they were trying to say was that schools (an equally ridiculous term) of smelts were congregating in large groups close to shore.

Smelts were small silvery fish about six-inches long and for a week or two while they were “congregating” they could be easily caught with large square nets suspended below a long pole.  In the late Fifties there were substantial concrete breakwaters jutting into the lake every 150 feet or so which had been placed there to slow the effects of erosion.

Just after dark, each one of those piers was populated with folks with their nets and they had flashlights which they shone onto the surface of the water to attract the fish. When they brought the nets up it wasn’t uncommon for there to be a half dozen or more of the shiny creatures flipping and flopping around.

I vaguely recall my brother bringing some home and mother asking him if he was going to clean them after having strongly asserted that she was not. Deep-fried? Pan-fried? I think ours were incinerated.

Some of the smelts that were caught were sold to the fish stores on Queen Street who then cleaned and resold them. How were sales? I don’t know. I still don’t know anybody who ate one.

Apparently the stock of smelts has declined as a result of the resurgence of predators such as salmon, trout, and northern pike, and smelt fishing has all but disappeared. I never fished in Lake Ontario but I spent many fun evenings watching others at a pleasant time of year when the warm spring days were approaching.

The smelts are no longer running. Maybe you can buy some on Queen Street. In the Fifties we could buy almost anything that we wanted there.

To read earlier chapters of BOOM, please see below: