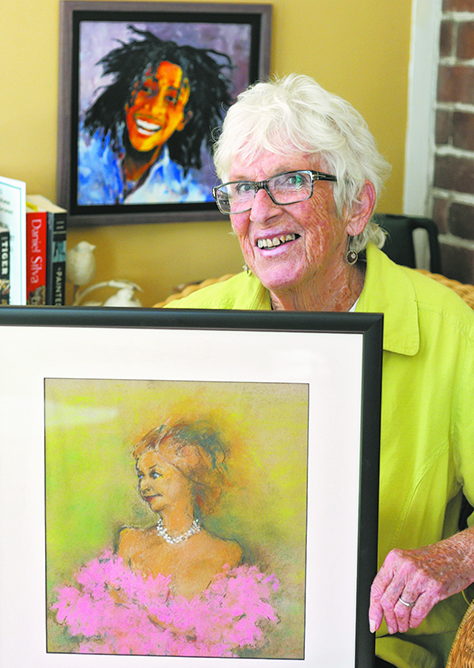 Shirley Jones grew up in the Beach and raised her own family of six children in the community. A talented artist and one of the founders of the Beach Guild of Fine Art, Jones is shown here in a Beach Metro News photo from 2013.

“Who can stop us from celebrating?”

Those who knew her often heard her proudly exclaim those words. For Shirley Jones, life was a pursuit of passion, purpose, and family. Surrounded by her loved ones, she died peacefully at her Beach home on July 25 at the age of 87.

Shirley and Skip bought a home, got married, and raised their family in the Beach.

Over the years, her family grew from six children to 18 grandchildren.

But Shirley was known for more than a being loving mother, grandmother, wife, and community role model. Her passion for art, sports, and knowledge knew no bounds.

A talented self-taught painter, Shirley expressed through her art a “personal sense of life,” and would always be found in her attic studio bringing “people, animals, places and moments in time” to life through her use of oils, watercolours, ink sketches, and acrylics.

Shirley was one of the founding members of the Beach Guild of Fine Art, and remained active with other groups such as the Scarborough Arts Council, the Cedar Ridge Creative Centre Members Gallery, and the Masterpiece Gallery Cooperative. She spent much of her life involved in artistic groups across East Toronto.

“My mum was a curious, intelligent, and life learner,” Shirley’s daughter Susan said. “Many people know her as an accomplished artist but she was also an excellent athlete.”

In addition to canoe and sailing trips with Skip, Shirley played every racquet sport she could. Tennis, badminton – and squash, of which she was among the first women to play at the Balmy Beach Club. She was also a huge fan of rugby, hockey, and football.

In between her art and her athletics, Shirley would always be seen with a book in hand.

“She was very well read, and was always up for a spot of political commentary,” her daughter Laurie said.

Her children believe her defining qualities were intelligence and self-confidence. Qualities that she exemplified throughout her life, and indeed passed on to her children, and her grandchildren.

“My mother believed in living in the moment,” Laurie said. “She told us to do your best, keep up with current events, to be kind, to pay attention to the world around you, and to lend a hand.”

Shirley lived by that advice she passed on.

“It was a perfect upbringing,” her daughter Sara recalled of their family growing up.

“Our mother always taught us to be independent,” she said. “She cared for us and set us on our own way. She was always there to give advice if asked, to share in our excitement and accomplishments, as well as our sorrows.”

Shirley passed those teachings on to her grandchildren as well as she was an active part of their lives.

“She found a very special relationship with each of her grandchildren,” her granddaughter Shannon said.

“She was genuinely interested in the events her grandchildren were involved in. She was pleased that we all chose different paths, educations, and professional endeavours, and she supported all of them.”

Shirley was the youngest child of Lillian and Major James Richards, and had three older brothers, Arthur, Robert, and James, who all – like their father – served in the Canadian Armed Forces.

She married Skip at Kew Beach United Church, just across from the home in which they raised a family.

Her husband would often tell the children, “Your mother is a wonderful woman.”

Those who knew her, agreed.