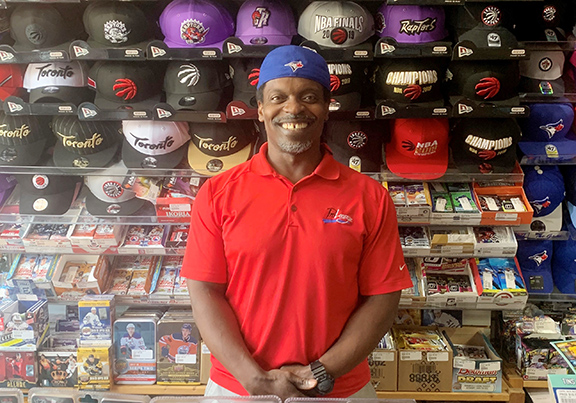 If you’ve lived in the Beach for any length of time, then you know Tex Thomas, owner of Pro League Sports.

Even if you don’t know his name, you recognize him from his reliable presence on Queen Street. Tex has a calm demeanor and easy smile; he’s a father of three kids, a sports fan and athlete at heart.

What you might not know about him is that he was born in St. Vincent and is one of five children that his mother and aunts worked hard to bring to Canada.

“At 11 years old, leaving was hard”, Tex told me, “I wasn’t happy about it, I didn’t want to leave St. Vincent and my friends. The day my brother and I were leaving to fly to Canada, my aunt had to come get us at the beach.”

Tex grew up in Regent Park where he joined the Boys and Girls Clubs of Canada.

“My mom didn’t have the finances to put me in different things, so I feel like the Club exposed me to a lot of great activities and kept me grounded”.

In high school Tex played every sport, but focused on his true talent, football. After high school he finished a three-year junior football program in Ottawa, then enrolled at York University where he was invited to rookie camp. Unfortunately, the school system missed the fact that he was two credits short.

A realization came upon him, “I’m done” he said. “I think I gave up because I was frustrated with the whole process, the motivation for me wasn’t there anymore”.

Life experience and football has taught Tex how to pivot, and so he does.

“I’ve always collected sports cards and memorabilia, so I started doing card shows throughout the city.”

Eventually the store front on Queen came open and in 1991 he fulfilled his dream of owning a business.

He has seen the ups and downs of ownership, the great successes of our beloved sports teams to the economic threat of a global pandemic. But he opened his business in a neighbourhood he loves and respects, and it is clear from his longevity that the feeling is mutual. That is not to say he has never experienced any negativity.

“I’ve had things happen to me, I’m not immune to it. You try not to remember these things, but I had a customer that came into the store who spat at me and called me the “N” word. Someone nearby called the police,” Tex told me. He was keen to let me know it was many years ago.

As he told me other stories, his understanding of our Black experience became more evident.

“I was driving with my ex-wife and an officer came to her passenger side window to ask her if she’s OK.”

Another time, he was approached by officers on either side of his car, one with his hand on his gun. Feeling uneasy he asked, “was I speeding”? The officer said, “If you were it wasn’t by much.” When he asked why he was pulled over he was told his car fit the description of someone they were looking for.

Looking back, he says, “It was scary. When I drove off I was really upset.”

I suppose you could say this could happen to anyone, but it made me wonder, how many white people have had this type of encounter?

Even through these various discriminations, Tex gives people the benefit of the doubt. He knows these experiences felt wrong and unfair but he also believes the officers really were looking for someone, just not him.

He is bolstered by the good friends he’s made in this community that have stood by him, and defended him against the occasional bigot. Recently, a friend and customer came to the store after George Floyd and the subsequent uprising hit the media. This friend came to ask how he was doing and apologised to Tex for all the racism Black people have had to endure. It was an act of love and solidarity. “It made me feel really good,” he said.

“Racism is not something you’re born with. I tell my kids, ‘show people who you are, be solid in that, your skin colour is fine.’”

When I asked if he was hopeful for the future and an end to racism, he said, “Hopeful is a strong word. I just hope we can get better.”

This is when I feel I have fully understood Tex. He is solid in who he is, but as every sport he’s ever played has taught him, he knows we all have a part in how this turns out.