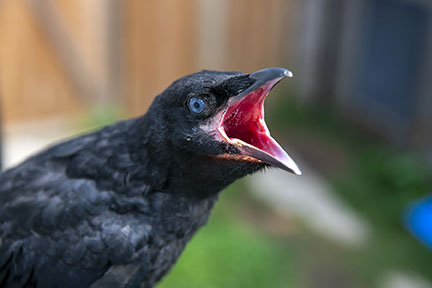 A baby crow calls and waits to be fed. Photo by Ann Brokelman.

When people ask me about birds, I often forget about, and then feel silly for forgetting about, crows.

However, it would be silly to ignore the intelligence and interesting behaviours of these remarkable birds.

They aren’t just smart, they are extremely intelligent. They can hide food and remember where they’ve left it, even if they’ve moved it to two or three different locations.

They have excellent memories and are very good at remembering the people who are either kind, or antagonistic to them. If you search for this online, you’ll find anecdotes of people who have left food out for crows and then had the crows respond by bringing them gifts, such as beads, buttons, or even the occasional earring in return.

You may have heard that a group of crows is called a murder, but why is that? Well, I don’t think anyone knows for sure, but it is believed to be based on old folk tales and superstition. Crows, as carrion eaters, have been symbolically linked with death for centuries, so perhaps the name originated when some people noticed that crows were always milling about the deceased, and decided to blame the death, (murder), on the crows themselves.

Adult crows have a harsh caw-caw sound but they also can make around 20 different vocalizations.

Some other calls are the harsh ‘scold’, the female courting ‘rattle/knock’ call, the juvenile begging sound and clicks, coos, grunts and rattles.

Their brain is similar in size to a parrot, and, just like a parrot, they can be taught to mimic our own words.

Crows are omnivores which mean they eat nearly anything, including: insects, seeds, fruit, worms, other birds, and any carrion they find laying on the side of the road. Crows are part of the Corvidae family which includes ravens, jays, magpies and nutcrackers.

Just the other day I was driving down to the beach when I saw and heard a family of crows in a parking lot, cawing. I pulled into the lot and decided to watch for a bit.

One crow flew in with food, (a large bug), to give to a young crow. The vocal sound of the chick eating got my attention.

It is really hard to describe, but it was fluttering their wings and making the “waaah, waaahhh” sound that roughly translates to “feed me, feed me”! The begging sound never stopped… poor parent!

I was treated to a few more feedings but, unfortunately, had no camera in the car. (The fact that ‘I didn’t have a camera on me’ may be the most shocking thing I’ve ever written.)

And I saved one of my favourite pro-crow points for last: if you hear crows cawing loudly, and repeatedly, there’s a very good chance that there is a hawk or owl nearby.

The crows don’t like having them around and will loudly do their best to chase them away. I would have missed out on hundreds of owl and hawk sightings if it weren’t for the help of crows.

Over the next few months the Ontario raptors (hawks, eagles, falcons, ospreys, turkey vultures and harriers) will be migrating along the Scarborough Bluffs and Lake Ontario.

If you find yourself near the water, and hear a repeated “caw-caw”, take a minute to look around you. I wouldn’t be surprised if you see something being chased by the crow.

Enjoy the end of summer everyone!