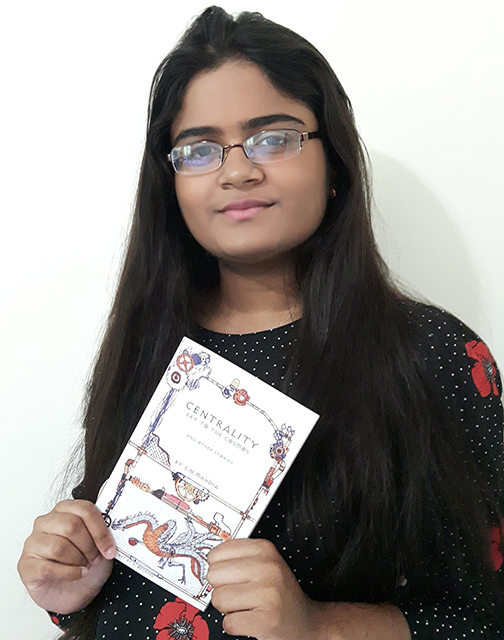 Her collection of short stories titled Centrality – The Key to the Cosmos: And Other Stories was self-published by Mahdia in June of this year.

“I always daydream a lot. And I always have these ideas, but I was never sure that it could actually be a book,” said Mahdia in an interview with Beach Metro News.

Mahdia gained confidence in her writing when she was taking a summer extra credit course. It was there that one of her teachers described her writing as talented beyond the ordinary for a teenager.

Mahdia said that she wrote the book between November 2019 until around the end of March 2020.

During this time, she said her English teacher Hannah Burkhardt was supportive of her work and helped her put everything together and with the editing process.

“After a parent-teacher interview Miss Burkhardt told my parents that if I continued writing, and gave her some of my stories to edit, she could make it into a book,” she said.

Amid the COVID-19 pandemic, Mahdia said that she figured out how to publish by herself through online research.

“The publishing process was completed in evenings and weekends after completing school work during remote learning. The independence and perseverance for someone so young is amazing,” said Burkhardt.

Mahdia said that the genre of her stories fall under either adventure or fantasy involving fantasy worlds and objects.

“My favourite story is the one I wrote about the pirates. Instead of writing like a typical pirate ship story with death and shoving people overboard and pillaging, I made it like maybe pirates aren’t what we think they are. We don’t really understand them that much,” she said.

“She’s absolutely amazing at line art and drawing. She gets all the credit for it,” said Mahdia.

Burkhardt connected the two students together to collaborate on the cover based on their similar interests in fantasy.

“Renee is known to explore fantastical worlds in her own work…The two students working together was a natural fit,” said Burkhardt.

Mahdia has garnered much support for her book from many people in the community including her former public school John A. Leslie on Midland Avenue where Mahdia has been invited to speak in September.

The principal of Malvern Collegiate, Bernadette Shaw acknowledged the achievements of the students in an email to the school community.

“I am gob-smacked! Wow, impressive.  I…did want to acknowledge here as well just how proud I feel to have both students attend Malvern CI. We will be sure to have copies in our library as well as post this information to the Malvern C.I. website,” she said in the email.

Mahdia said at the moment, she’s not sure what’s next for her.

Centrality – The Key to the Cosmos: And Other Stories is available on Amazon in both paperback and Kindle versions. To learn more, visit https://www.amazon.ca/Centrality-Key-Cosmos-Other-Stories-ebook/dp/B089T8GY7N