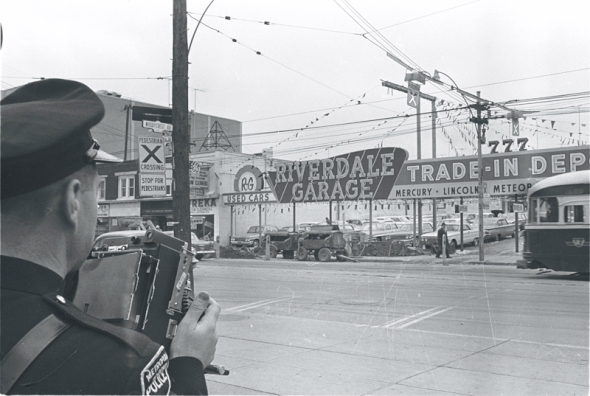 The Riverdale Garage on Danforth Avenue in the 1950s. Photo from Lost Toronto.

Many times, people have asked me about the Danforth. There have been many articles written about Danforth Avenue, but I think the book The Danforth in Pictures: A Brief History of the Danforth by Barbara Myrvold is the best and most historically comprehensive I have seen.

Many other names have been attributed to this street or avenue including The Danny, The Don and others.

I like to think about one I remember many years ago: Used Car Lot Heaven. There were miles of the best used cars in Toronto along the Danforth, so the title rang true if you were in the market for buying either a used or new car – financing no problem.

There were many year years before the Bloor-Danforth subway opened that the Danforth was the place to go for shopping for both bargains and expensive items. There were tens of thousands of people that used to shop and stare in the windows for clothes, shoes, underwear and more. That was the era when you could get anything on the Danforth.

In my mind, being from the west end originally, if you wanted to get a good, solid bargain on a used car then the Danforth was the place to go.

There were different names and different times for the cars that came up in my research, but one time stands out and that was the Second World War and just after.

The 1940s was the halcyon days of cars, service stations, dealers etc…It was a driver’s dream, so let us take a look at those past days.

In the 1950s and ’60s, there was Ted Davy Ltd. and other names familiar and not familiar on this old/new dusty road of used vehicles. During the heyday of the new and used car lots and service stations, there were close to 100 businesses devoted to automobile sales and service along the Danforth.

No other street in Canada had such a solid reputation for car sales or as dense a concentration of them as the Danforth.

Let’s look at some of the names and locations. There was the Riverdale Garage and right near to it, if you can believe it, was the Danforth Motor Co. Just a little further east was the Anderson McLaughlin Buick Co. which were on the south side between Pape and Jones avenues.

We must remember all of these garages and car lots were in vogue during the early years of the Second World War and beyond.

Most of the automobile manufacturers did their part and helped the war effort by building military vehicles. The auto businesses didn’t really start up again until after the war ended. However, the businesses servicing cars continued. These included the Kruse Service Station, Drayton Motors, McCharles Auto Service, British American Oil, and Grover Motors near Woodbine Avenue.

While driving in your juiced-up jalopy on the Danforth you would see a kaleidoscope of colours of the different signs. There would be blue, red, green, yellow identifying the gas stations and dealerships.

There was York Motors, Queen City Auto Sales, Ontario Motor Sales and the classiest auto showcase that was on Danforth near Main Street was Giles, Rice and Peters. There was also Watson Motors and the Kerr Service Station.

Now those were not the only distractions on the Danforth during the 1940s. There were also lots of banks including the Royal, the Dominion, and Bank of Commerce that are still around today.

There were also lots of theatres including Prince of Wales, Grover, Oxford-Avalon where you could watch movies. There was bowling and pool rooms such as Commor Billiardes, Rosedale Bowling, and The Acorn.

If you wanted to dance, there was the Arcadian dance hall to tap you toes to a tune. After a busy and tiring week, the soldiers were marching to a different tune during the 1940s. On a Saturday night they would drown their sorrows along the Danforth is such spots as The Danforth Hotel (Noah’s Ark), Ridley Hotel, Linsmore Hotel, or the Hotel Stafford. They could also buy beer from the Brewer’s Warehouse.

On Sunday mornings the soldiers could save their souls from the previous night’s excess by going to Hope United, the Mennonite Mission, Holy Name or Sanctuary of Peace. All of them fine places of worship.

There were several funeral parlours on the Danforth as well. As I said, it had everything.

It was without a doubt one of the busiest streets and shopping places in the eastern half of Toronto in those days.

I could go on and on about the places to eat, the clothing stores, dressmakers and every other kind of shop. There was even an East Toronto Weekly newspaper. There were bookstores such as the Grover Book Exchange. There was Snowballs Cigars and even the Wm. Edwards Harness Maker.

But the best, I think, was at the eastern end by Warden Avenue where you could get your car serviced at Smith’s Service Station, eat at Smith’s Bar B.Q. and dance at Smith’s Dance Pavillion.