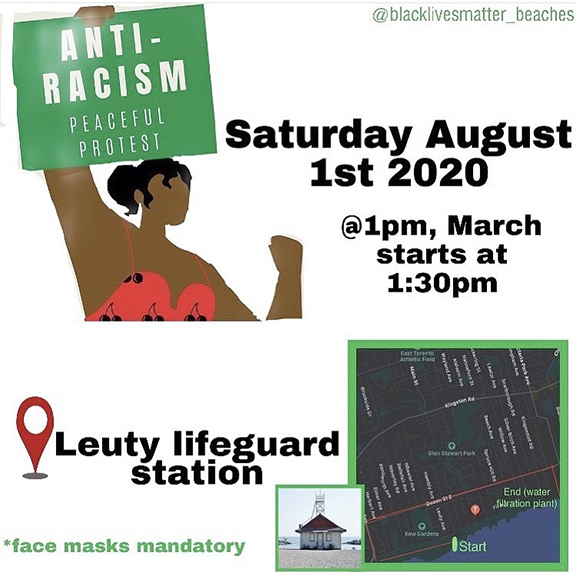 An Anti-Racism Peaceful Protest is planned for Saturday, Aug. 1, in the Beach.

Two local residents are organizing a Black Lives Matter march in the Beach set for the afternoon of Saturday, Aug. 1.

The march to protest against anti-Black racism is being organized by Abi Braybrook and Amany Abubaker.

Those taking part are asked to gather at 1 p.m. on Aug. 1 in front of the Leuty Lifeguard Station, at the foot of Leuty Avenue at the lake. The march will begin at 1:30 p.m. and head west along the Boardwalk to Woodbine Avenue where it will turn north towards Queen Street East. It will then proceed east along Queen Street East and is planned to finish at the R.C. Harris Water Filtration Plant.

Braybrook and Abubaker both grew up in the community attended school in the Beach.

They said they are organizing the protest march to give the community a chance to stand up against anti-Black racism and to raise awareness of the issue.

“What better place to have a protest than the Beach which has always had a strong sense of community. It would be amazing to see the residents of the Beach community come together and fight for this cause even if it doesn’t directly affect them,” said Braybrook in a note to Beach Metro News.

“Over the years of living and going to school in the Beach, we have seen many great things going on in this community , but also some not so great things. We have both seen, heard , and witnessed racism in this community, and we believe racism stems from ignorance which is why we are doing this protest. We need to educate/make people aware of the issues that Black people face, because if we don’t who will?”

One of the key areas they would like to see changes in is the education curriculum regarding Black history.

“The biggest flaw in the education on Black history in schools is that we don’t get taught that racism is still very present in our society today,” wrote Braybrook.

“The goal of this protest is to make people aware that Black people today DO face many issues that are 100 per cent preventable, and that you don’t have to be Black to care about this issue/fight for this issue. We are stronger together!”

For more information on Saturday’s Black Lives Matter march in the Beach, please visit the Instagram page at @blacklivesmatter_beaches