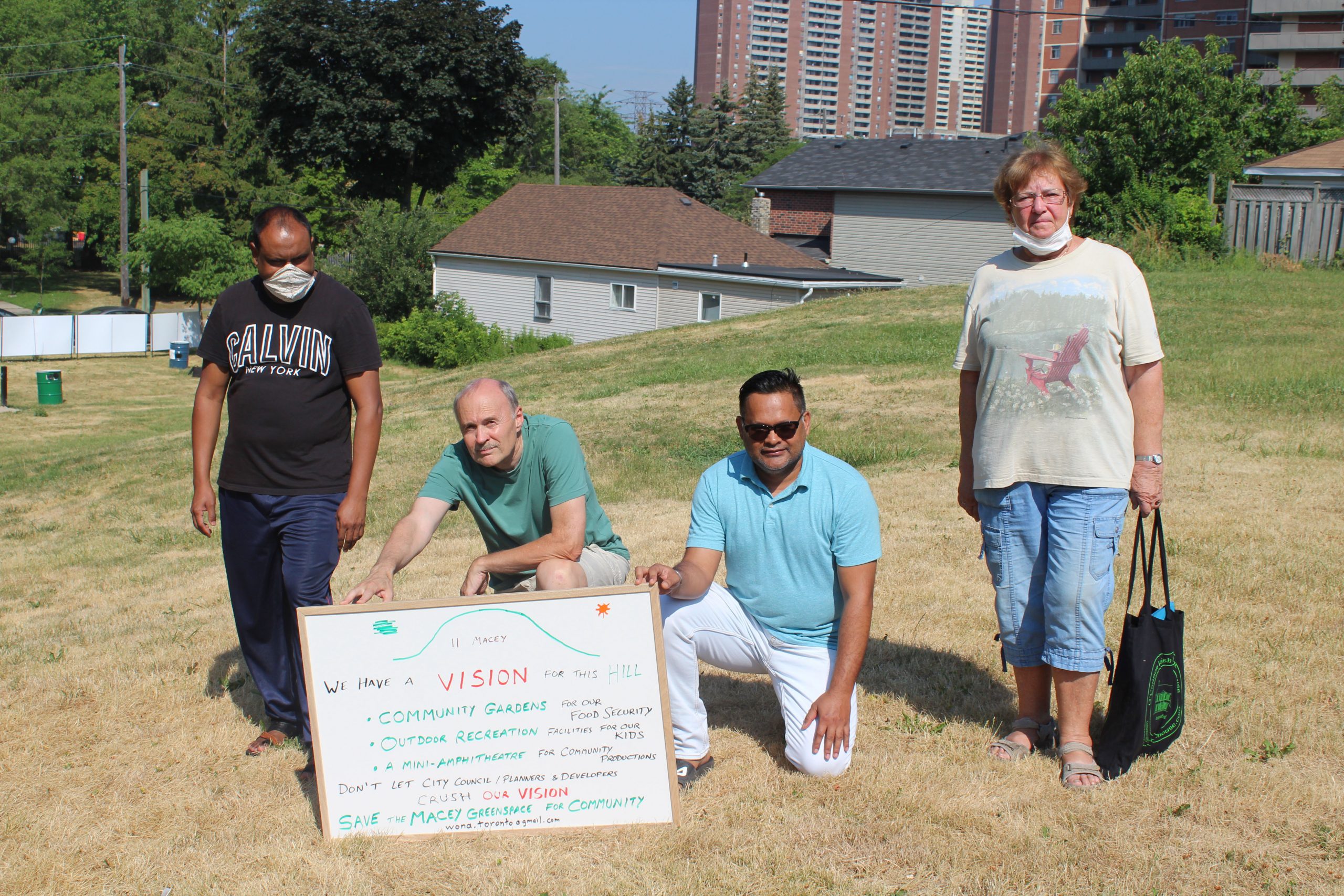 West Oakridge Neighbourhood Association members Shahed Ahmed, left, Eric Stark, Robaid Rahman and Wendy McCreath on top of the hill on the land at 11 Macey Ave. They say the site is not a suitable location for the city to be building a 56-unit modular affordable housing project. Photo by Alan Shackleton.

Toronto is building a modular housing development near Danforth and Victoria Park avenues aimed at assisting people experiencing homelessness – and for residents living nearby “it creates consternation.”

The West Oakridge Neighbourhood Association has written several letters to the city, the planning and housing committee, and members of the media, expressing their concern with the modular housing development proposed for 11 Macey Ave.

They raise concerns with the proximity of The Beer Store and an LCBO branch nearby the proposed site.

“It’s discouraging,” West Oakridge organizer Eric Stark said. “Our voices haven’t been heard. They said it’s a done deal, done in so much haste, without any input if it’s the appropriate type or configuration.”

The city held three virtual public information sessions – June 16, 23, and July 8 – in which it went over the project with residents that attended online.

“It’s very limited,” he said. “People have to have the right technology and be tech-savvy to have participated, and a lot of people are not in that category, and some don’t speak English.”

The city has fast-tracked much of its HousingTO 2020-2030 Action Plan in response to pressures brought by COVID-19.

On June 29 and 30, city council considered a report from the community engagement process, and requested the Ministry of Municipal Affairs to amend zoning for 11 Macey Ave.

The site application is being reviewed, but occupancy target is aimed for fall of this year as the modular units are prefabricated and built at a factory off-site and then transported to the location for assembly.

The city responded to the letter, telling West Oakridge residents that several community members and organizations were consulted.

After reviewing the list, Stark said most of the organizations weren’t located in close proximity to 11 Macey Ave. in contrast to many concerned residents.

Instead, the group proposes the modular housing development be swapped over to the Dentonia Park Golf Course.

That would mean the currently designated parkland at the golf course would move to 11 Macey Ave. and the modular housing units would be constructed on an equivalent plot of land in the former parkland.

They cite advantages of the proposed alternative location as nearby to transit, the possibility to construct more storeys of housing, and allowing more multi-functionality in the building as to combine socially assisted bachelor units with market rate family rental units.

For 11 Macey Ave., residents want to see it used for community building activities. Either community gardens, outdoor recreation, or arts and culture.

Former Toronto mayor John Sewell also noted his opposition to the development in support of the West Oakridge residents.

Citing an affordable housing project from 1973 near Dundas Street East and Sherbourne Street, he said it was similarly built as single-unit housing.

“There was simply too much of it crammed together and it has proven too difficult to manage well,” he wrote. “I think the same thing will happen with this development on 56 single units.”

Sewell, Stark, and the West Oakridge residents make it clear that they want to help the city find solutions for homelessness, but believe that it could be done better, and that a mix of socially assisted units and market units, single units and family units, would be better for integration.

“We all want to contribute to help,” Stark said. “But how it’s being done, we’re not confident.”