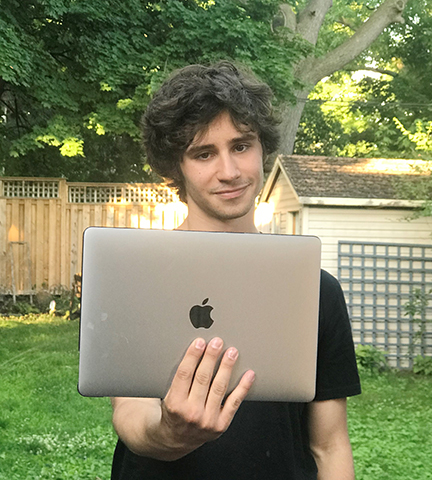 Jonny Bojin with the laptop that was lost on the beach in early June and dropped off at the 55 Division police station a few days later. Photo: Submitted.

On the evening of Thursday June 11, my son and a friend went to down to the beach.

They ended up sitting down there for a few hours. Around 30 minutes after leaving he realized that he had left his backpack down on the sand around the tennis courts.

It was now after midnight, but he ran down retracing his steps without any luck.

When he got home he woke me up and told me about losing his backpack. And yes he had his MacBook pro with him in the backpack.

As we were giving up, my son found the backpack in the park just east of the tennis courts. The MacBook was gone as was his wallet

He was upset as anybody would be. The MacBook was a congratulations present for being accepted in the Humber Jazz piano program, and had a number of his original compositions on it. And no – it wasn’t backed up

I encouraged him to report the serial number to the police, and he did.

The rest of the weekend was very stressful and he felt awful for what had happened.

I decided to put a post up on the Beaches Facebook page – just recounting what had happened and I figured you never know, somebody may have some information.

The comments were all encouraging. More than 800 likes were received.

On the Monday morning (June 15) at around 11 a.m., a police officer walked up my driveway. I was on a work call in the backyard and he told me the great news that the laptop had been turned in to the police at 55 Division.

I told my son to pay this good deed forward and to donate to a good cause. The laptop was left anonymously at the police station.

If anybody in the community had anything to do with this, I thank you.

My kids recently spent their 10th year without their dad On Father’s Day. He passed away in October 2010. I can’t help but think that Brian had something to do with bringing the laptop back to our son.

I have lived in the Beach my whole life and I can’t wait to share this story with my friends and family.

Thank you for being so supportive.