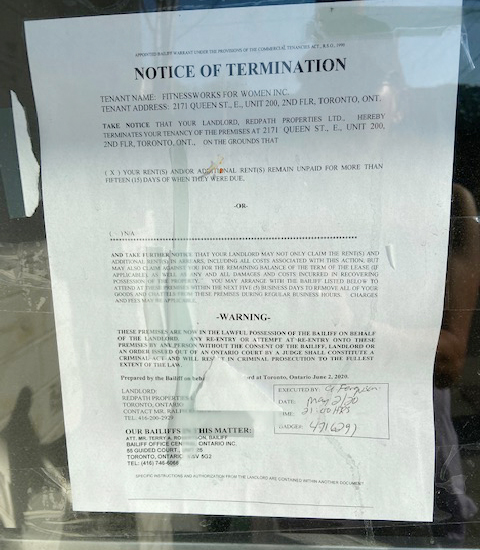 FitnessWorks For Women on Queen Street East was served with Termination of Lease notice earlier this year.

A gym on Queen Street East in the Beach was forced to close after what the owner calls an “improper eviction.”

Ariella Tsafatinos has run FitnessWorks For Women on Queen Street East and Lee Avenue for 17 years. Following months of negotiations with her landlord, she is moving her business online and shutting down operations at the physical location.

Declining revenues since the COVID-19 pandemic began in March have made it impossible for her to cover her rent. On June 2, a termination of lease notice was posted on the front door of FitnessWorks.

Tsafatinos says her landlord – Redpath Properties Ltd. – didn’t give any notice of the coming eviction.

“We were told we could pay what we can in an email from the landlord,” she said.

Tsafatinos had received an email from the property manager (also the landlord’s daughter) that she could pay whatever amount she could because of the loss of revenue. And she did.

In March and April, she paid 60 per cent of her rent. By May, she was only able to pay 25 per cent. With little options, she appealed to her local MP, noting the federal help offered to landlords through the Canada Emergency Commercial Rent Assistance (CECRA).

In a letter to the landlord and property manager, Beaches-East York MP Nathaniel Erskine-Smith wrote saying he believed the landlord was “acting in violation of the law in at least two respects.”

Erskine-Smith used to practise commercial litigation law prior to his election as MP. He noted that the first violation was “you failed to provide adequate notice to the tenant, and therefore failed to give the tenant any opportunity to remedy any breach.”

He added that the second violation was regarding an email correspondence between Tsafatinos and the property manager.

“By your email dated May 2, you clearly state: ‘Please pay me as much as you can at this point and we can continue to defer payment.’ The tenant proceeded to pay 25 per cent of May’s rent and then again 25 per cent of June’s rent, in reliance upon that clear representation,” Erskine-Smith wrote.

He called it a “failure to abide by the Commercial Tenancies Act.”

He reminded the landlord and property manager that participation in CECRA was encouraged for commercial rent assistance.

The province’s moratorium on commercial evictions took effect a day after Tsafatinos said the notice was posted on her door.

It’s not enough to keep her business afloat, and Tsafatinos said fighting a legal battle would be “prohibitively expensive.”

The landlord and property manager responded to Erskine-Smith, saying they would rescind the eviction and deal with the matter in court.

Tsafatinos received a key again in late June, as the landlord had changed the locks after posting the initial notice. She said further negotiations have not helped.

“We made an offer based on what we could afford and hoped they would avail themselves of CECRA,” she said. “They refused. They expect full rent.”

Tsafatinos said she’s worried they’ll evict at the first opportunity, so she is slowly packing up, and selling things.

The termination of lease notice remains on the door.

Tsafatinos has continued her business online via Zoom video conferences.

Redpath Properties Ltd., the landlord, and the property manager, did not respond to a request from Beach Metro News for comment on this story.