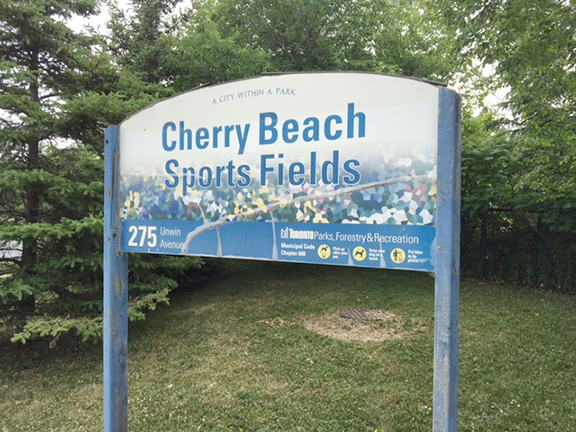 The Cherry Beach Soccer Club is preparing to begin its house league season next month.

Restrictions due to the COVID-19 pandemic have put organized sports leagues in an unprecedented situation this year as they deal with the rules around safe distancing, number of people allowed to gather together and the lack of field permits among other challenges.

However, as those restrictions begin to ease and more and more sectors of society are allowed to reopen under strict health guidelines, some organized summer kids’ sports leagues are moving closer to getting started.

Starting in July, the Cherry Beach Beach Soccer Clubs plans to offer its house league program for boys and girls.

“The house league will not be as usual,” club president John Hendriks told Beach Metro News in an interview this week.

There are numerous safety rules mandated by both Ontario Soccer and Toronto Public Health which the club will be following in order to provide the house league soccer experience for local youngsters this summer.

Those rules include limiting the number of players that can be involved at any one time, frequent breaks for disinfecting with wipes and hand cleaners, and restrictions on number of non-participants and the safe distances they must keep from each other.

“We feel we can adhere to the rules and provide a season,” Hendriks said.

Unlike usual sports house leagues, which depend heavily on parent volunteers for team coaching and managing, this year’s coaching and training staff for Cherry Beach will all be club staffers.

“We will have a higher rotation of club coaches, and not parent volunteers or junior-aged referees,” said Hendriks. “We will also have a field marshal with disinfectants and wipes.”

From a learning soccer skills basis, he said this year’s Cherry Beach house league season will be an excellent opportunity for players to learn from high-level coaches and improve the level of their game for the future.

“This will be far superior as we will have much more experienced coaches this year, and not volunteer house league coaches,” said Hendriks. “The crew I have are highly-qualified coaches, and this will be a fun, enthusiastic experience.”

Until the end of June, field permits for organized sports leagues are not being issued by the City of Toronto. That meant the cancellation of Cherry Beach’s spring soccer tournament, and also the cancellation of The Robbie International Soccer Tournament at a number of southwest Scarborough and East Toronto fields.

Hendriks said that it appears most of Cherry Beach Soccer Club’s operations this summer will be based out of Birchmount Stadium, St. Patrick Catholic Secondary School field and the Cherry Beach Sports Fields complex on Unwin Avenue.

“These are big facilities with lots of space for everyone,” he said.

He added the situation is different for competitive teams this season, but there are plans to get playing games later in the summer when it is deemed to be safe. For now, competitive players can train under the guidelines established by Ontario Soccer, which at the moment means individually or with a family member.