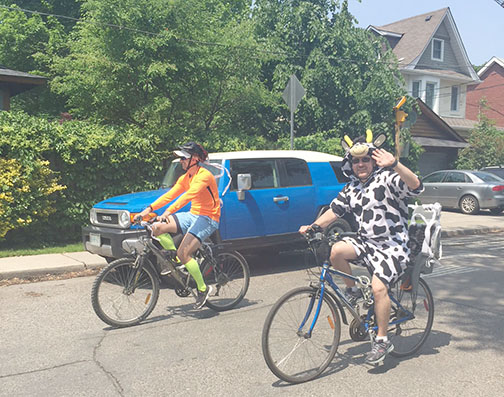 Teacher Patrick Breech rides the neighbourhood near St. John Catholic School last week while in a cow costume. Breech did the ride to celebrate the hundreds of acts of kindness done by the student members of the school's Triple C club during COVID-19. Photo: Submitted.

St. John Catholic School teacher Patrick Breech recently rode through the neighbourhood near the Kingston Road school on his bike to wave to students and celebrate their good works in the community. Oh, and he was wearing a cow costume at the time.

Breech, who lives in the area, has been a teacher at St. John for the past 12 years.

Once virtual and distance learning began for the school’s students due to the COVID-19 pandemic closure, members of the St. John social justice club began to think of ways they could help others during these tough times.

The club is called Triple C, which stands for Children Creating Change. The student members decided that performing acts of kindness towards others was what was needed, and they set a goal of doing 250 of them.

The students exceeded that goal and are now approaching 500 acts of kindness, Breech told Beach Metro News in a recent note.

“The biggest type of kind act was writing cards and creating art for long term care residents. We partnered with Main Street Terrace and 170 cards/art pieces were delivered,” said Breech in his note. “We were also able to drop off 80 cards/art pieces to the Houses of Providence.”

Students and their families documented and promoted the acts of kindness, which also included chalking positive messages on sidewalks, and supporting food banks

“The cards alone helped us reach our goal of 250 kind acts, but the students did much more,” wrote Breech. “Other things that students did were positive messages and art in windows, as well as in chalk on sidewalks. Families dropped off empty egg cartons (needed by the food bank at Grant African Methodist Episcopal Church), as well as donated food to the Neighbourhood Link Emergency Food Bank. Students and families made donations to various charities, connected with relatives who were isolated, and much more.”

To celebrate, Breech rode the neighbourhood in the cow costume on June 10.